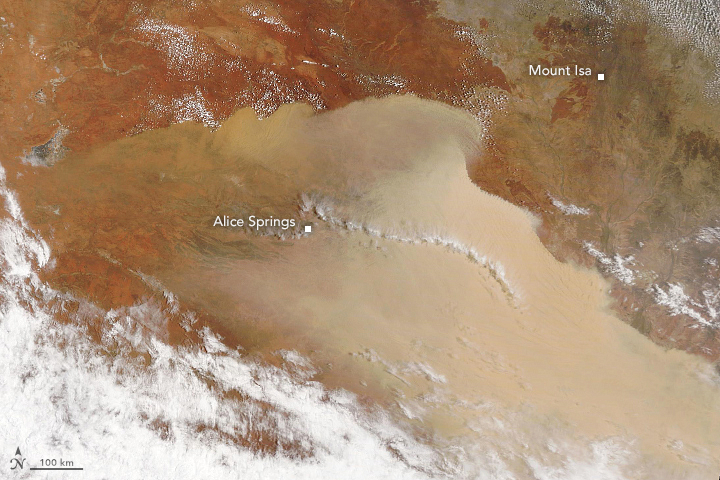 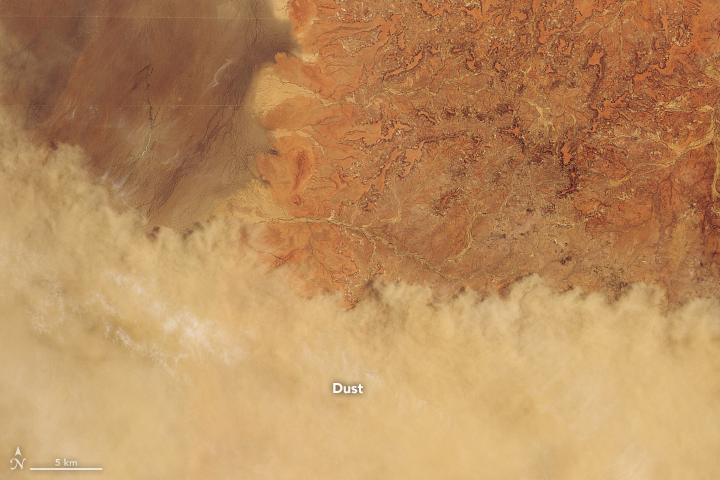 For months, wildfires raging in Victoria, Queensland, and New South Wales have darkened skies in eastern Australia. In mid-January 2020, the skies turned a distinctive shade of orange for a different reason, as an enormous dust storm swept across the continent.

The Moderate Resolution Imaging Spectroradiometer (MODIS) on NASA’s Terra satellite captured a natural-color image (top) showing a front of thick dust stretching thousands of kilometers across Australia on January 11, 2020. The Operational Land Imager (OLI) on Landsat 8 acquired a higher-resolution image of the dust front in Queensland near Eromanga (below) about an hour earlier.

Strong winds associated with a passing low-pressure trough and storm system triggered the dust storm. Months of unusually dry weather have parched the soils, making it easier for winds to lift clay-sized (less than 4 micrometers), silt-sized (4 to 62.5 micrometers), and sand-sized (62.5 micrometers to 2 millimeters) dust particles high into the air.

While dust storms are relatively common in Australia in the spring and summer, storms on this scale are not. “This is a massive continental wide storm that continued across the Tasman Sea and seems to have reached New Zealand, after which time it made a clockwise whirl in the Southern Ocean,” said Patrick De Deckker, an emeritus professor at Australian National University who has written extensively about Australian dust storms. “Most of the dust seems to have come from the Lake Eyre basin, which is the major source of Australian dust.” The last Australian dust storm on this scale was the “Red Dawn” storm that struck in 2009, according to De Deckker.

Meanwhile, the economic costs of dust storms can be extensive. Blowing dust can reduce the fertility of farmland, harm or kill animals, and damage crops in the field. It regularly halts transportation systems, slows solar power production, and damages homes and infrastructure.