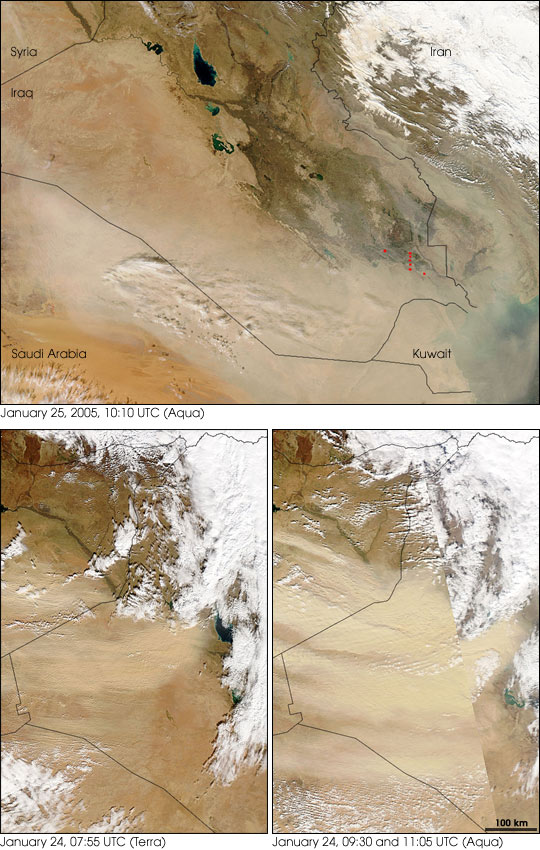 A fast-moving dust storm whipped across the Middle East between January 24 and 25, 2005. By January 25 (top), the plume of dust stretched hundreds of kilometers across Iraq, Saudi Arabia, Kuwait, Iran, and the Persian Gulf (lower right corner). The pinkish-tan dust softens and blurs the richer orange and tan color of the region’s desert terrain and partially veils the olive-colored wetlands in southern Iraq.

The pair of images at the bottom show the progression of the dust storm on January 24. The image at left was captured by the Moderate Resolution Imaging Spectroradiometer (MODIS) on NASa’s Terra satellite on the morning of January 24, and it shows the thick cloud of dust (center) making its way across eastern Syria and into western Iraq. The image at right is a combination of observations collected during two overpasses of NASA’s Aqua satellite, several hours later. In the span of a few hours, the dust storm had spread across nearly the entire lower half of the scene.

These large sand and dust storms are a significant natural hazard in the region, and are often driven by fierce northwest winds called shamal winds. They blow in from the northwest with the passing of a storm with a strong cold front, which is the leading edge of a mass of cold air. The passage of cold fronts in the Northern Hemisphere often brings snow followed by strong west or northwest winds. In the Middle East, these winds scour the dust and sand off the surface and loft it into the air. In Iran, where the winter storms have been bringing heavy snow, dust has settled onto snow-covered mountains.

The large image provided above is the January 25 image at a spatial resolution of 500 meters per pixel. The MODIS Rapid Response System provides these images at additional resolutions.