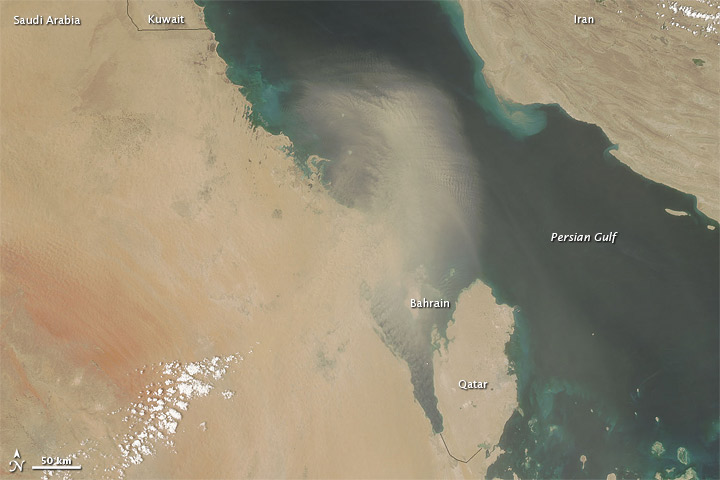 Dust blew off the coast of Saudi Arabia and over the Persian Gulf on May 4, 2011. The Moderate Resolution Imaging Spectroradiometer (MODIS) on NASA’s Aqua satellite took this picture the same day.

The dust forms a counter-clockwise swirl northwest of Qatar, passing over Bahrain. West of Qatar appear thin breaks in the dust resembling comb marks. These separations between dust plumes, which have not yet coalesced into a single plume, suggest that some of the dust might have arisen near the coast. A large veil of dust from farther inland, however, partially obscures land surface features along the shore.

Sand seas spread over most of the Arabian Peninsula. One such sea, the Empty Quarter, or Rub’ al Khali, contains about half as much sand as the Sahara Desert. Not surprisingly, the peninsula provides ample material for dust storms. This is especially true in the summer, when high temperatures cause the air near the ground to become unstable, enabling even light winds to stir dust particles.