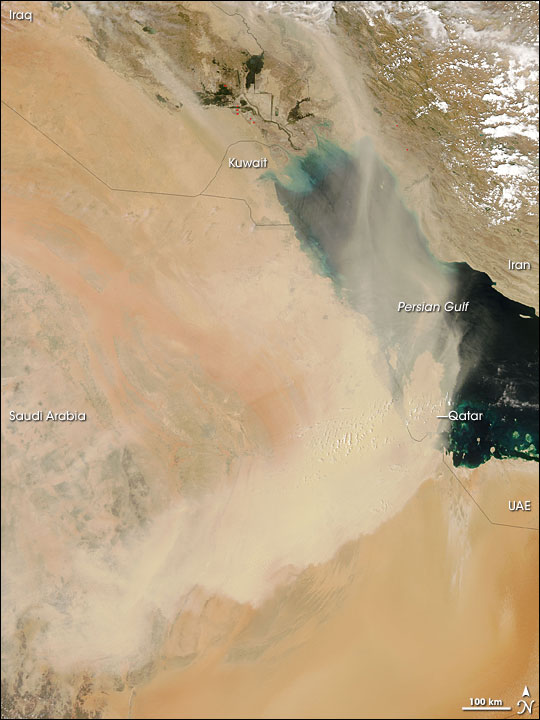 A massive dust plume blew out of Saudi Arabia and over the Persian Gulf in mid-April 2008. The Moderate Resolution Imaging Spectroradiometer (MODIS) on NASA’s Aqua satellite captured this image of the dust storm on April 18, 2008.

In this image, the camel-colored dust plume blows in a counter-clockwise direction out of south-central Saudi Arabia, over the Gulf, and over Iran. The dust narrowly misses the United Arab Emirates (UAE), and leaves the eastern part of the Gulf clear. The dust appears particularly thick over Qatar. On April 19, the Gulf Times, a news source based in Qatar, reported that a haze of dust covered the peninsula the previous day, and dusty conditions could be expected to continue for at least another half-day.

Sand seas blanket much of Saudi Arabia, especially in the southern part of the country, near the borders with Yemen and Oman. Besides plentiful sand for the storms to transport, the Arabian Peninsula provides optimal weather conditions for such storms to form. As springtime temperatures rise, air in the lower atmosphere becomes hot and unstable, increasing the likelihood that dust particles will be lofted into the air. 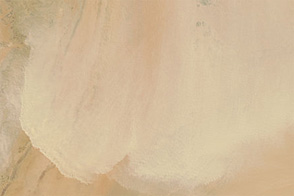 A dust plume stretches from Saudi Arabia to the United Arab Emirates in this natural-color image acquired on March 3, 2012.