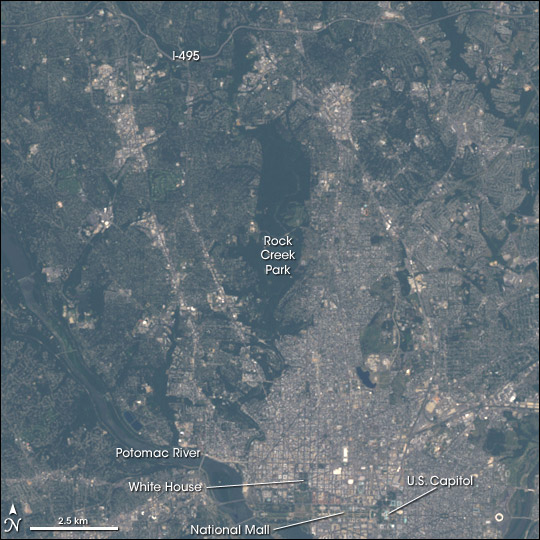 Rock Creek National Park is a forested valley running through the District of Columbia along the banks of Rock Creek. The national park connects with additional state park land outside of the district, providing a green corridor from near the heart of the city out into the northwestern suburbs. First explored as a location for a presidential mansion immediately after the Civil War, the land became a national park in 1890. It was one of the first of the national parks in the United States, and it is certainly one of the most easily accessible.

This Landsat 7 natural-color image of Rock Creek Park shows the deep green vertical stripe of the park in the image center, with thin extensions north into the Maryland suburbs and under the I-495 Beltway—the freeway that encircles Washington and its inner suburbs—and south through Georgetown to the Potomac River. Most of the national park portions of Rock Creek are in this southern area, including the Smithsonian National Zoo, Peirce Mill, and Old Stone House Visitor’s Center.

Other striking features in the imagery include major Washington D.C. landmarks, such as the Capitol, the National Mall, and the White House and the Ellipse behind it. The crisp “O” feature east of the Mall in the bottom right corner of the image is RFK Stadium. Although the suburbs of the city have hints of green from suburban landscaping, the character of the parklands is dramatically different from the surrounding land, and most especially from the dense grey of buildings and homes in the city’s center and running north along the park’s eastern boundary.

These data were collected by Landsat 7’s Enhanced Thematic Mapper Plus (ETM+) instrument on June 18, 2002. The image was created by combining data from the red, green, and blue channels (ETM+ bands 3, 2, and 1 respectively) to show a natural color view.