African dust blows across the Atlantic 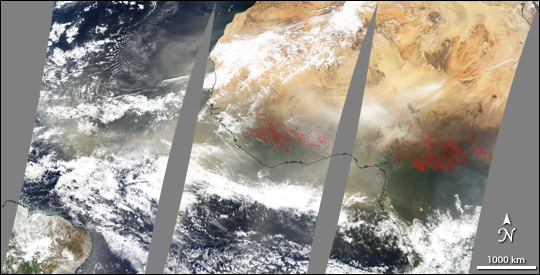 On January 10, 2005, the Moderate Resolution Imaging Spectroradiometer (MODIS) on NASA’s Terra satellite captured this series of images of a massive dust storm blowing out of Africa’s Sahara Desert. Thick clouds of tan dust blanket most of the western coast of Africa and blow over the Atlantic Ocean toward the Caribbean Sea and the Gulf of Mexico. A thinner veil of dust in the upper left corner of the image suggests that the dust already extends farther west than the regions shown here. At bottom left corner is northeastern South America.

As the Terra satellite circles the globe from north to south, MODIS collects images in long bands, or swaths, that are approximately 2,300 kilometers wide. This image is made from parts of three consecutive swaths, with grey bands filling in the regions between the swaths. Terra’s orbit progresses from east to west, so the swath at far right was collected first, and the swath at far left was collected last.

The storm is originating in the Bodele Depression, northeast of Lake Chad, where bright white bands of dust brush toward the west. To the south, red dots mark the locations of thousands of agricultural fires, which may be contributing to the haze.

Large dust storms such as this one happen regularly, and a recent NASA study suggests that they may impact weather on the west side of the Atlantic by affecting the size and strength of thunderstorms and the amount of rain they produce. When Saharan dust is in the air over Florida, NASA researchers found that the tops of thunderstorm clouds—the anvils—are smaller in area, but better organized and thicker, affecting the amount of sunlight that reaches the ground. These cloud characteristics may have long-term climate impacts.

More immediately, the dust particles may decrease the amount of rain that falls during a thunderstorm. Dust acts as a landing point where water molecules collect to form cloud droplets, which coalesce to form rain. When dust is thick, water molecules have more places to gather, so clouds may contain large numbers of smaller cloud droplets instead of larger rain droplets. The result is drier thunderstorms. For more information, see Sahara Dust Affects Thunderstorm Behavior in Florida.