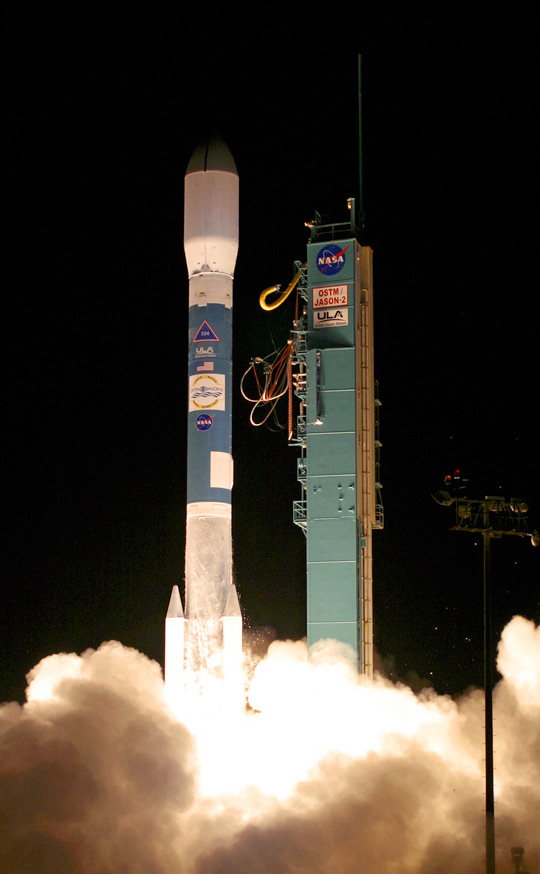 When we hear the word topography, most of us think of mountains and valleys on dry land. But the surface of the ocean has topography, too, and the variation in the height of the sea surface from place to place reveals important information about weather, climate, and rising sea level. On June 20, 2008, NASA launched the Ocean Surface Topography Mission (OSTM)/Jason 2 satellite, the latest in a series of U.S./French satellites to collect observations of ocean surface height.

This image shows OSTM/Jason 2 in the process of liftoff atop a Delta II rocket. The satellite launched at 12:46 a.m. Pacific Daylight Savings Time from Vandenberg Air Force Base, California. Shortly after launch, OSTM/Jason 2 separated from the rocket’s second stage and spread its solar arrays. Ground controllers examining OSTM/Jason 2’s signals judged it to be operating as expected.

Since heated water expands in volume, warmer ocean areas are “taller” than cooler areas. Scientists have used ocean surface topography data to calculate the energy imbalance in the world’s oceans caused by global warming, to monitor the comings and goings of natural climate fluctuations like El Niño and La Niña, and to improve predictions of hurricane intensity.

The OSTM/Jason 2 satellite carried several instruments to measure ocean height and water vapor in Earth’s atmosphere, and instruments to verify the accuracy of these measurements by determining the satellite’s precise position at all times. Jason 2 will settle into orbit just behind Jason 1, and the two spacecraft will fly in formation, making nearly simultaneous measurements, for about six months to allow scientists to precisely calibrate OSTM/Jason 2’s instruments.

Once cross-calibration is complete, Jason 1 will alter course, adjusting its orbit so that its ground tracks fall midway between those of OSTM/Jason 2. Together, the two spacecraft will double global data coverage. This tandem mission will improve our knowledge of tides in coastal and shallow seas and internal tides in the open ocean, while improving our understanding of ocean currents and eddies.

The Ocean Surface Topography Mission (OSTM)/Jason 2 is a partnership of NASA, the National Oceanic and Atmospheric Administration (NOAA), the French Space Agency Centre National d'Etudes Spatiales (CNES) and the European Organisation for the Exploitation of Meteorological Satellites (EUMETSAT).

Photograph by NASA. Caption by Michon Scott and Rebecca Lindsey, based on a press release from NASA/JPL.