basalt lava flows. Active agricultural fields along the Gila River are a rich green set against the surrounding desert."> 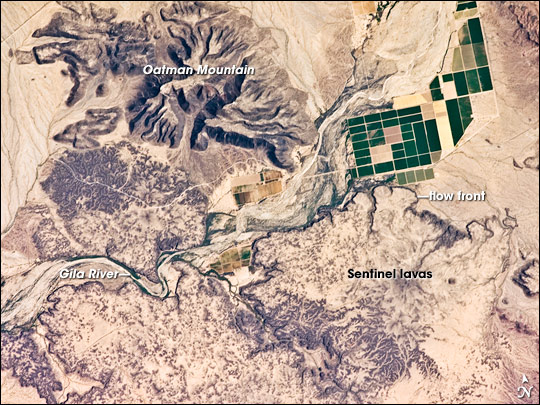 This detailed astronaut photograph depicts a portion of the Gila River channel (image center) between the Sentinel Volcanic Field and Oatman Mountain in south-central Arizona. The northernmost boundary of the Sentinel Field is visible in the image, recognizable by the irregular flow fronts, or leading edge, of thin basalt lava flows which erupted from low volcanic cones approximately 3.3–1.3 million years ago. The lava flow tops range in color from dark brown exposed rock to a tan, carbonate-rich soil cover. Active agricultural fields along the Gila River are a rich green set against the surrounding desert.

In contrast to the gentle topography of the Sentinel Volcanic Field, Oatman Mountain (upper left) rises from the Gila River channel to an elevation of approximately 560 meters (1,837 feet). While Oatman Mountain is located close to the Sentinel field, it represents an earlier phase of volcanic activity in the area. Volcanic rocks comprising Oatman Mountain were more viscous, leading to shorter, stronger flows that are weathered into stream channels and scarps on the mountain slopes. The mountain is a popular hang gliding destination due to abundant thermal currents rising from the surrounding desert floor and lava surfaces.

Astronaut photograph ISS017-E-9598 was acquired on June 18, 2008, with a Nikon D2Xs digital camera fitted with a 400 mm lens, and is provided by the ISS Crew Earth Observations experiment and the Image Science & Analysis Laboratory, Johnson Space Center. The image was taken by the Expedition 17 crew. The image in this article has been cropped and enhanced to improve contrast. Lens artifacts have been removed. The International Space Station Program supports the laboratory to help astronauts take pictures of Earth that will be of the greatest value to scientists and the public, and to make those images freely available on the Internet. Additional images taken by astronauts and cosmonauts can be viewed at the NASA/JSC Gateway to Astronaut Photography of Earth. Caption by William L. Stefanov, NASA-JSC.