Lagoons and Reefs of New Caledonia 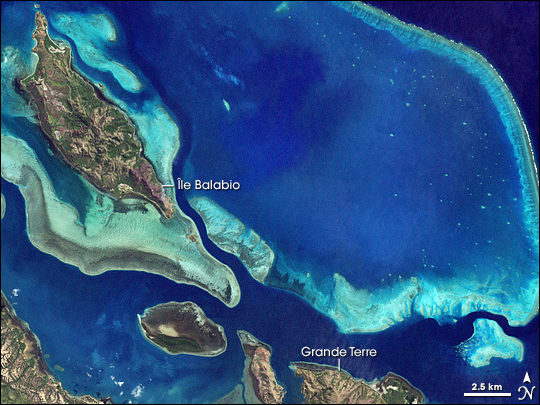 In July 2008, the United Nations Educational, Scientific, and Cultural Organization (UNESCO) added 27 new areas to its list of World Heritage sites. One of those areas included the lagoons of New Caledonia. Some 1,200 kilometers (750 miles) east of Australia, this French-governed archipelago contains the world’s third-largest coral reef structure. The coral reefs enclose the waters near the islands in shallow lagoons of impressive biodiversity.

On May 10, 2001, the Enhanced Thematic Mapper Plus on NASA’s Landsat 7 satellite captured this image of Île Balabio, off the northern tip of Grande Terra, New Caledonia’s main island. In this natural-color image, the islands appear in shades of green and brown—mixtures of vegetation and bare ground. The surrounding waters range in color from pale aquamarine to deep blue, and the color differences result from varying depths. Over coral reef ridges and sand bars, the water is shallowest and palest in color. Darker shades of blue characterize deeper waters. Reef-enclosed, shallow waters surround Île Balabio, and a larger, semi-enclosed lagoon appears immediately east of that island. Immediately north of Grande Terra, unenclosed, deeper waters predominate.

The coral reefs around New Caledonia support an unusual diversity of species, including large numbers of predators and big fish, turtles, and the world’s third-largest dugong population.