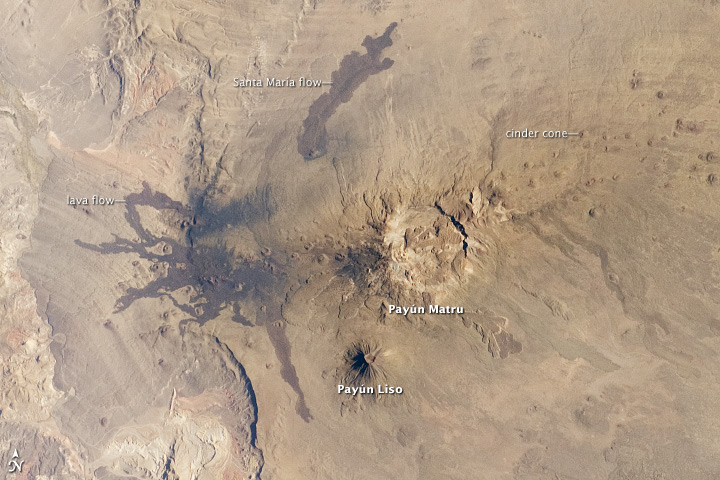 At 3680 meters and 3715 meters above sea level, respectively, the Payún Matru and Payún Liso stratovolcanoes are the highest points of the Payún Matru volcanic field of west-central Argentina. This astronaut photograph illustrates some of the striking geological features of the field, which is approximately 140 kilometers east of the Andes mountain chain.

The summit of Payún Matru is dominated by a roughly 15-kilometer wide caldera (image center), formed by an explosive eruption approximately 168,000 years ago. Several dark lava flows, erupted from smaller vents and fissures, are visible in the northwestern part of the field. One distinct flow, erupted from Volcan Santa María (northwest of Payún Matru), is approximately 15 kilometers long.

A number of small cinder cones—appearing as brown dots due to the short lens used—are built on older lava flows (grey) to the northeast. While there is no recorded observation of the most recent volcanic activity, oral histories suggest that eruptions were witnessed by indigenous peoples.

Most Andean volcanoes and earthquakes follow the trend of the greater Andes mountain chain, and are aligned roughly north-south above the tectonic boundary between the subducting (descending) Nazca Plate and the overriding South American Plate, as predicted by plate tectonic theory. Volcanic centers that are located some distance from the major trend—such as Payún Matru—typically result from more complex geological processes, and can provide additional insight into the subduction process.

Astronaut photograph ISS030-E-30265 was acquired on December 31, 2011, with a Nikon D2Xs digital camera using a 70 mm lens, and is provided by the ISS Crew Earth Observations experiment and Image Science & Analysis Laboratory, Johnson Space Center. The image was taken by the Expedition 30 crew. The image has been cropped and enhanced to improve contrast, and lens artifacts have been removed. The International Space Station Program supports the laboratory as part of the ISS National Lab to help astronauts take pictures of Earth that will be of the greatest value to scientists and the public, and to make those images freely available on the Internet. Additional images taken by astronauts and cosmonauts can be viewed at the NASA/JSC Gateway to Astronaut Photography of Earth. Caption by William L. Stefanov, Jacobs Technology/ESCG at NASA-JSC.