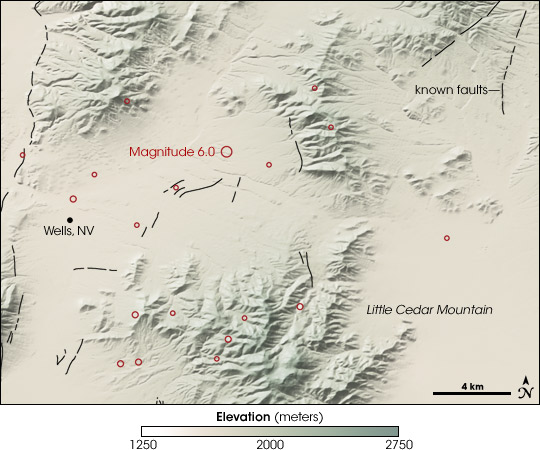 Nevada is one of the most seismically active states in the United States. Residents of northeastern Nevada were reminded of this fact on the morning of February 21, 2008, when a magnitude 6.0 earthquake caused extensive building damage and at least three injuries in the small city of Wells, said the U.S. Geological Survey. The quake was centered about 10 kilometers (6 miles) northeast of the city, as shown by the large red circle in this image. Numerous smaller aftershocks, shown with smaller red circles, followed the initial quake. The earthquake occurred on a previously unmapped fault that, like the scores of faults that riddle Nevada, is a normal fault. As rocks shift along a normal fault, the land on one side of the fault rises, while the land on the other side of the fault falls. Thus, the forces that rattle the state from time to time also give it its distinct washboard topography.

This image illustrates the hand-in-hand relationship between faults and mountains in Nevada. Known faults follow the base of mountain ranges, separating the mountain front from the valley floor. The fault that caused the February 21 earthquake had not been previously mapped and is not shown on the image. The distinctive, cliff-like scarp that delineates most normal faults had not broken through to the surface. Valley sediment still buries the fault that caused the February 21 earthquake. Other faults in the region tend to line up with the mountains.

Similar faults line the base of nearly every mountain in the Basin and Range province of North America, an area marked by roughly north-south running ridgelines and flat, sediment-filled valleys. Nevada lies at the heart of the Basin and Range province. The rows of parallel mountains formed as geologic forces pulled the land apart. For millions of years, the Pacific Plate, the slab of earth on which the Pacific Ocean rests, pushed under the North America plate. The force compressed the land now covered by Nevada, and parts of Idaho, Oregon, California, Utah, New Mexico, and Arizona. When the Pacific Plate shifted and began to move north parallel to the North America plate, the strain eased and the land began to rebound. As it expanded, the crust cracked, forming hundreds of faults, a process that still continues. As the earth continued to shift, land on one side of the faults fell, while the other side rose. Lines of steep mountains—ranges—formed. The valleys—basins—that separated the mountains filled with sediment and debris washed off the mountains.

You can download a KMZ map file of the fault lines and quake locations suitable for use with Google Earth.

NASA map by Robert Simmon, based on data from the USGS National Map Seamless Server and Quaternary Fault and Fold Database of the United States. Caption by Holli Riebeek.