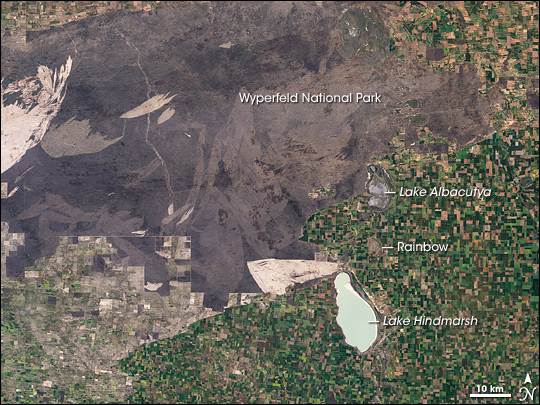 About 25 million years ago, much of what is now the northwest corner of Victoria, Australia, sat at the bottom of a shallow sea. As the waters receded, the area changed to a near-forest of shrubs and small trees. Starting in the 1840s, after Europeans settled the region, much of the area was burned to clear land for agriculture. Wanting to preserve natural areas, naturalists began petitioning the Australian government to protect the habitat in the early twentieth century. In 1921, Wyperfeld National Park was established. In the years that followed, the park’s area expanded.

The Enhanced Thematic Mapper Plus on NASA’s Landsat 7 satellite captured this image of part of Wyperfeld National Park on October 1, 1999, in the middle of Australia’s spring growing season. The drought-tolerant, natural vegetation of the park is gray-brown, and it contrasts markedly with the tan and green rectangles of surrounding farmland. Within the park, fires have left prominent burn scars. In this image, more recent burn scars look like off-white sand. The largest scar appears along the left edge of the image. Next to it is an older, darker scar, where vegetation has begun to recover. Another recent, sizable scar appears northwest of Lake Hindmarsh.

This semi-arid region is watered by the occasional overflowing of the Wimmera River, which supplies Lake Hindmarsh and Lake Albacutya. Occasional rains also bring to life dormant, diminutive desert plants. Characteristic of Australia, however, the natural vegetation preserved within the park boundaries appears less lush than that of the surrounding, irrigated farmland. The apparent dullness is probably due to various traits that plants living in such an arid location have evolved, including thick bark, and sparse, small leaves or needles. For example, the eastern part of the park is covered by mostly by different species of mallee, shrubby Eucalyptus species. The leaves of Eucalyptus plants often have a gray-green cast.