Terra satellite was rounding the top of the globe, making its way from the eastern tip of Siberia and across the Arctic Ocean towards northern Norway and northwest Russia, when it captured this unique view of a total solar eclipse on August 1, 2008."> 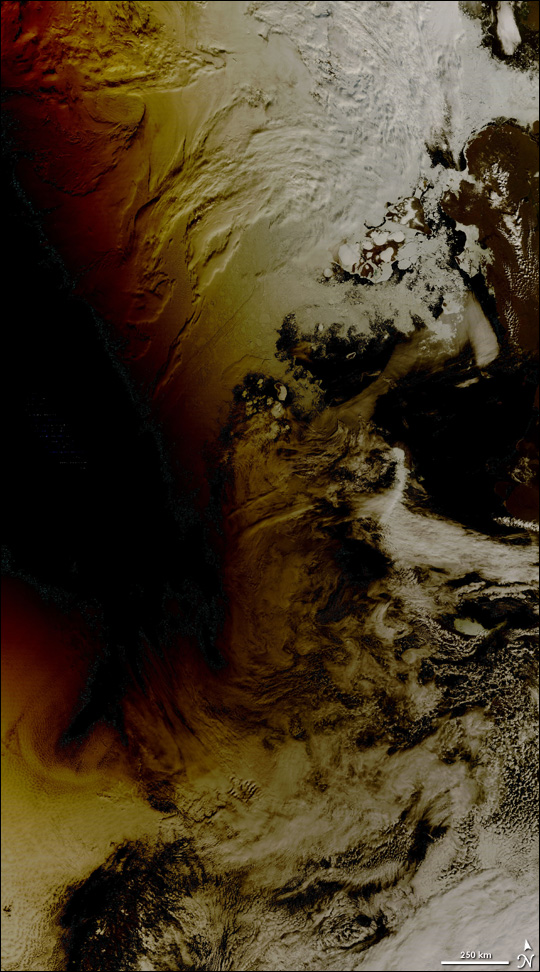 The circular disk of the Moon casts an oval-shaped shadow across the left edge of this image. In the region of totality, where the Moon entirely obscures the Sun, the shadow is complete. The edges of the shadow are fuzzy, gradually lightening from black to red, brown, and yellow until the shadow is no longer discernable. In these areas of semi-shadow, the Sun is only partially blocked. On any other day, the photo-like view captured by the Moderate Resolution Imaging Spectroradiometer (MODIS) on the Terra satellite would be brilliant white since both the ever-present Arctic clouds and the ice that caps the northern sea reflect light. In this image, however, it is as if the world is painted in sepia: the low light casts a yellow-brown glow on much of the scene.

The image was captured between 9:35 and 9:45 UTC. In the area shown in the image, the Sun was completely obscured for about two minutes. As Earth rotated, the shadow moved southeast across the surface. At the same time, the satellite crossed the Arctic, its path nearly perpendicular to the eclipse. Because the shadow was moving across Earth’s surface as the satellite approached, it has a long oblong shape in this image. In an instantaneous snapshot from a platform that was not moving relative to Earth, the shadow would be more circular.