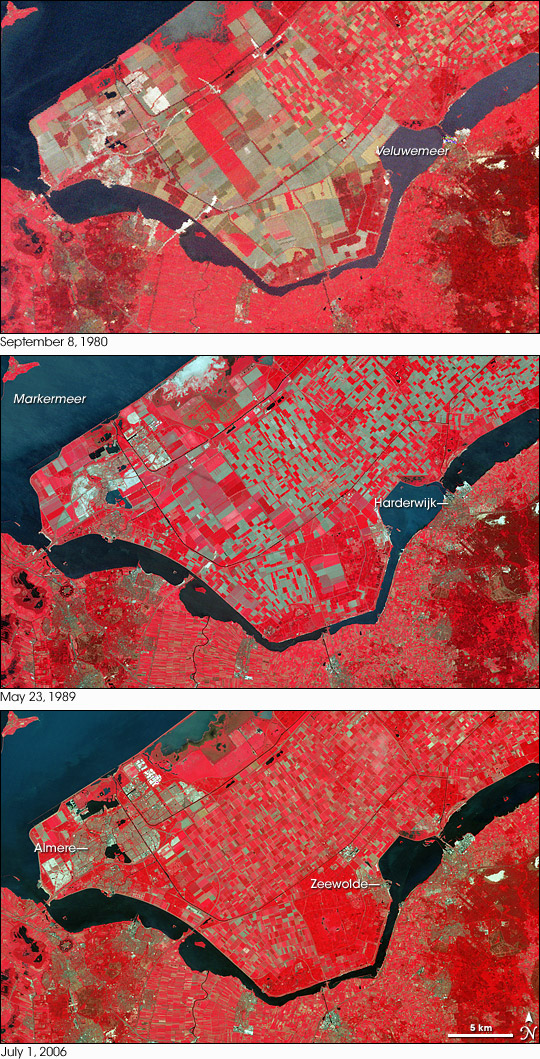 Along the coast of The Netherlands lies a lake known as IJsselmeer. This place had long been an inlet of the North Sea, known as the Zuiderzee, but beginning in 1932, Dutch engineers completed a dike across the Zuiderzee to create a freshwater lake. Changes to the landscape did not end there. More dikes followed, and over time, engineers used pumps to drain water from the area. In the aftermath of the draining, reeds began to grow on the old sea bottom, gradually drying out the soil. Locals later cleared the reeds and planted crops. This process created expanses of usable land known as polders. In total, reclaimed polders at IJsselmeer increased land area in The Netherlands by roughly 1,620 square kilometers (626 square miles).

Over the years, NASA’s Landsat satellites captured repeated images of IJsselmeer, and recorded changes on one such polder, shown in the top-middle part of each image. Landsat 2 took the top picture on September 8, 1980. Landsat 5 took the middle picture on May 23, 1989. Landsat 7 captured the bottom image on July 1, 2006. In these false-color images, red indicates vegetation, and the brighter the red, the more robust the plant life. Water appears navy blue. Pavement and bare soil range in color from pale blue to gray-green. Lakes Markermeer and Veluwemeer flank this polder. Local settlements Harderwijk, Zeewolde, and Almere can also be seen in these images.

Although the polder’s extent remains consistent, these images show changes in the land cover. Some differences likely result from changes in season. In the image acquired in September 1980, large patches of dark brownish red indicate less robust vegetation, consistent with the onset of autumn. The most conspicuous changes, however, occur in the cultivated area on the polder. In the image acquired in 1980, crops appear as large rectangular blocks. In the succeeding shots, the rectangles have shrunk, suggesting greater diversification. The image from July 2006 shows the brightest shades of red predominating on the polder, which would be expected in the middle of summer growing season.

Beginning in 1932, Dutch engineers completed a dike across the Zuiderzee to create a freshwater lake. Engineers later used pumps to drain water from the area, creating expanses of usable land known as polders. These images show changes in the land cover in one such polder between 1980 and 2007.