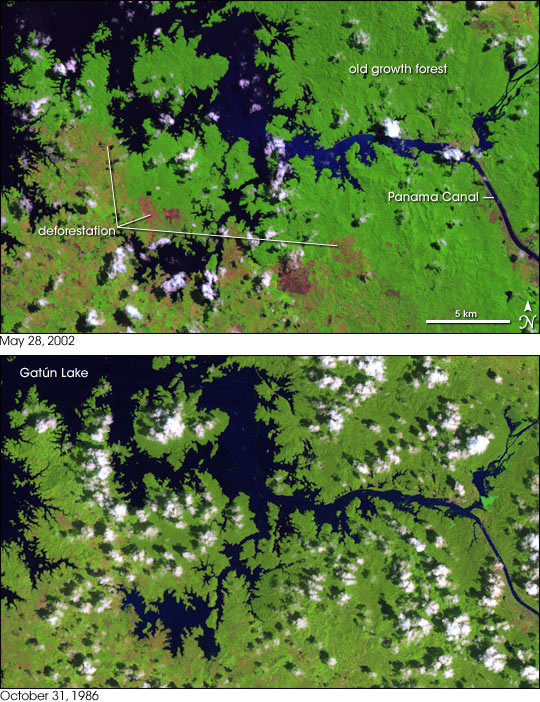 Completed in 1914, the Panama Canal has saved every ship passing through it a 7,872-mile trip around South America. Now, each ship takes a 51-mile journey through an intricate system of gates, locks, and drains. A single trip through the canal requires 52 million gallons of water, and busy days can see up to 40 trips. For the water it needs, the canal depends on one of the world’s biggest artificial lakes: Gatún Lake. For its water supply, Gatún Lake depends on the health of the surrounding rainforest.

These images show the southern portion of Gatún Lake and the canal as they appeared in October 1986 and May 2002. Water is dark blue to nearly black, vegetation is bright green, clouds are white, and bare or sparsely vegetated land is in shades of pink or red. Some differences in appearance of the two images results from different surface water conditions: as an equatorial nation, Panama does not have the same cycle of four seasons as temperate regions, such as the United States or Europe, but rainfall is seasonal. May is wetter than October, and soil saturation changes how reflective the surface is.

However, the biggest changes in the two images is due to deforestation. On either side of the canal, old growth forests appear deep, verdant green. The bright pink and red patchwork of deforested land that dominates the lower left of the images has grown considerably in the years between the two images.

In Panama’s healthy rainforest, rainwater saturates the soil, then feeds the streams supplying Gatún Lake. In the last few decades, however, logging and slash-and-burn agriculture have claimed half of the surrounding rainforest. Deforested land cannot absorb the region’s heavy tropical rains; the excess water floods Gatún Dam and flows out to sea. The floodwaters also fill the lake with sediment. Dredging the lake bottom has restored its storage capacity, but also forced local residents to filter the lake water or rely on bottled drinking water.

The drought of 1990-91 gave Panamanians a taste of what can happen without adequate water in Gatún Lake. Canal operators had to limit trips through the canal to just 30 a day. A growing number of Panamanians have expressed concern over the canal’s viability if deforestation continues.

NASA’s Landsat 5 Thematic Mapper instrument collected the data for the 1986 image, while the Enhanced Thematic Mapper Plus on Landsat 7 captured the 2002 image. These false-color composite images use data in the infrared, near-infrared, and red portions of the spectrum (TM/ETM+ bands 5, 4, and 3, respectively).