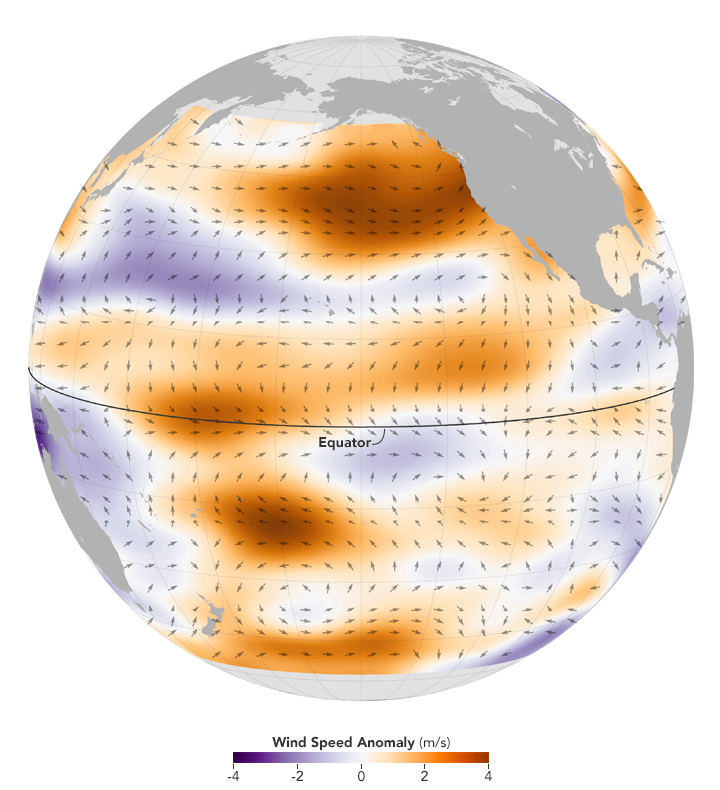 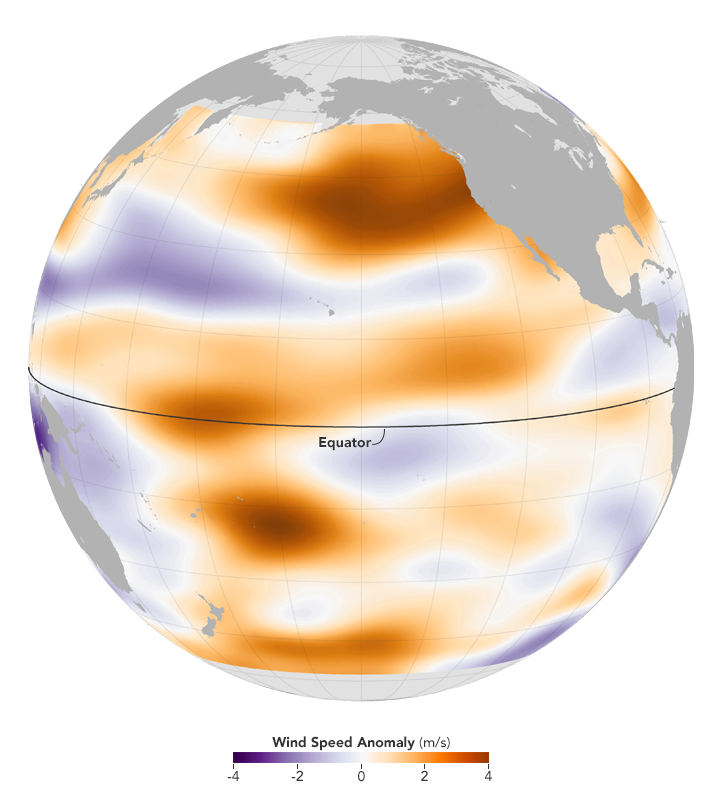 As we come through one of the most powerful El Niño events on record, most of what we hear and read about it tends to focus on water temperatures and on changes in rainfall and snowfall. But the behavior of the winds and waters of the Pacific basin are tightly intertwined during an El Niño event. The cyclical warming of tropical waters in the eastern and central Pacific typically begins with a slowdown in the east-to-west trade winds that usually pile up warm water in the western Pacific. That slowdown results from a series of west wind bursts that send pulses of warm water across the basin toward the Americas—a phenomenon called Kelvin waves.

But which energy source—warm water masses or shifting winds—drives the phenomenon? It is actually both. “El Niño is like the proverbial chicken-and-egg problem,” said Michael McPhaden of NOAA’s Pacific Marine Environmental Laboratory. “During an El Niño year, weakening winds along the equator lead to warming surface temperatures that lead to further weakening of the winds.”

The images above show the change in direction and intensity of winds near the surface of the Pacific Ocean as observed by NASA’s ISS-RapidScat instrument. Mounted on the International Space Station, RapidScat does not measure winds directly. Instead, it bounces microwave pulses off the ocean surface and reads the reflections back toward the sensor. Rough waters—those disturbed more by the wind—return a stronger signal than smooth waters. From that information, scientists can derive wind speed and direction based on the position of the waves.

In the images, arrows represent how the primary direction of the wind changed from January 2015 to January 2016. The change in wind speed is represented by colors, with surface wind speeds increasing in orange-red areas and decreasing in blue areas. (Note: do not confuse colors with temperatures, as some of the warmest waters in the area occur where winds are weakest.) This anomaly (or change) map was built by comparing the average wind speeds and directions from before the latest El Niño (January 2015) versus the peak of the current event (January 2016).

“The El Niño signal is evident in the eastward-blowing anomalous winds in the tropical western and central Pacific,” said Svetla Hristova-Veleva, a member of the RapidScat team and a scientist at the Jet Propulsion Laboratory. “The El Niño signal also shows up in the stronger convergence into the tropical eastern Pacific, as evidenced by the winds moving toward the equator.”

In the images, winds near the equator (5° North to 5° South) blow more forcefully from west to east in the western and central Pacific; meanwhile, the easterly (east to west) trade winds weakened near the Americas. These wind shifts allowed pulses of warm water to slosh from the western to eastern Pacific over the course of 2015. The map also shows winds in the tropics (23°N to 23°S) generally converging toward the equator. This reflects the intense convection near the equator, where warm surface waters promote intense evaporation and rising air. Consequently, air masses move toward the equator to replace the rising air.

Other changes occurred well away from the equator; scientists refer to these as teleconnections. For instance, RapidScat detected a strong clockwise-rotating (anti-cyclonic) wind anomaly in the northeastern Pacific. Hristova-Veleva suspects that the strong winds in this area were partly the result of stronger-than-normal atmospheric circulation (Hadley cell). That is, air that rose above the super-heated waters of the central tropical Pacific sank back to the surface in the sub-tropics with more than usual intensity. McPhaden also sees connections to a stronger-than-normal Aleutian low pressure cell. That system cooled the ocean and promoted stronger winds, a pattern that tends to occur during strong El Niños.

“While no two El Niño events are alike, the evolution of the current one and its global impact have been different from expectations—posing new questions and opening the door to new investigations,” said Hristova-Veleva. “Today’s fleet of satellites will allow us to investigate the relationship between precipitation anomalies and surface winds. Such comprehensive observations were not available during previous large El Niño events.”

“Maps like this give us a better representation of what is happening over the ocean,” said McPhaden. “We’ve now got a complete data set from one of the strongest El Niños on record. These data will advance our understanding and help us improve computer forecast models for El Niño.”