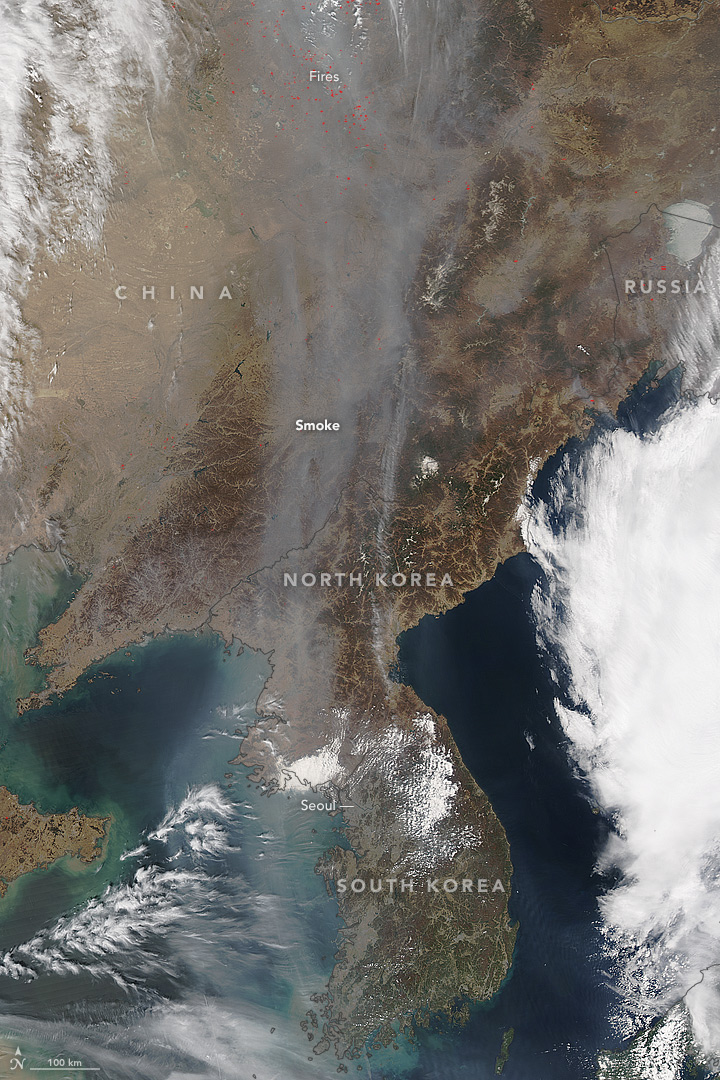 The Korean peninsula is an ideal laboratory for understanding air quality. Home to about 75 million people, the peninsula sits downwind from several major pollution sources, and also has a few of its own.

The peninsula lies a few hundred kilometers east of several large, industrialized cities in China that emit pollutants such as sulfur dioxide and nitrogen dioxide. Winds routinely send plumes of dust from the Taklimakan and Gobi deserts toward the Koreas. And outbreaks of wildfires and crop fires in China and Russia can produce plumes of smoke that make their way into Korean airspace. Meanwhile, the city of Seoul (population 10 million) is a major source of urban pollution. Crop fires are a seasonal occurrence in North Korea. As a result, the air Koreans breathe contains a complex and seasonally changing mixture of gases and particles that can pose problems for human health.

To gain a better understanding of air pollution in this part of the world, NASA and the Republic of Korea are developing plans for a cooperative field study of air quality in May and June 2016. The Korea U.S.–Air Quality study (KORUS-AQ) will assess air quality across urban, rural, and coastal areas of South Korea using combined observations from aircraft, ground sites, ships, and satellites. The findings are crucial for the development of ground- and space-based instruments, as well as computer models that can provide more accurate air quality assessments for decision-makers.

“KORUS-AQ is a step forward in an international effort to develop a global air quality observing system,” said James Crawford, a lead U.S. scientist on the project from NASA’s Langley Research Center. “Both of our countries will be launching geostationary satellites that will join other satellites in a system that includes surface networks, air quality models, and targeted airborne sampling.”

Key science goals include: developing a better understanding of the conditions affecting the vertical distribution of air pollutants; how that distribution relates to cloud cover; what factors govern ozone photochemistry and the formation of aerosols; and how well models represent real atmospheric composition over the Korean peninsula.

NASA will work with South Korea’s National Institute of Environmental Research using a King Air aircraft from Hanseo University, a NASA DC-8 flying laboratory, and a NASA Beechcraft UC-12B King Air. Five South Korean instruments will fly on the DC-8, and one NASA instrument will be onboard the Hanseo aircraft.

On April 15, 2015, the Moderate Resolution Imaging Spectroradiometer (MODIS) on NASA’s Aqua satellite acquired the image above, which shows smoke from fires in China blowing south over the Korean peninsula. The KORUS-AQ team planned the field campaign for spring because April to June is when the Korean peninsula gets its strongest influx of pollution from upwind sources.