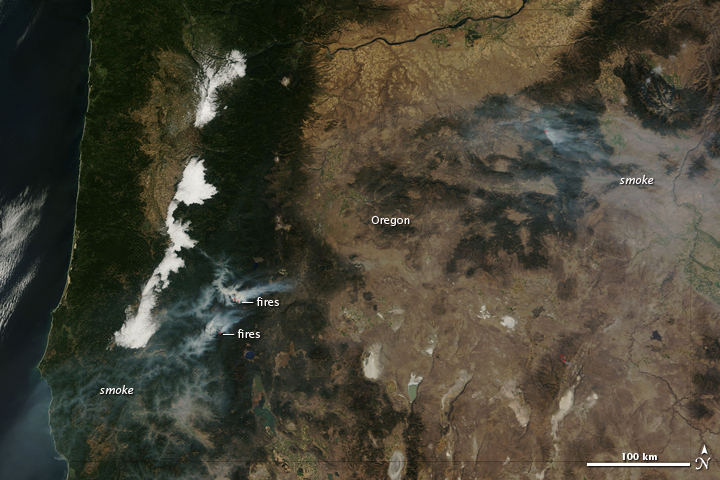 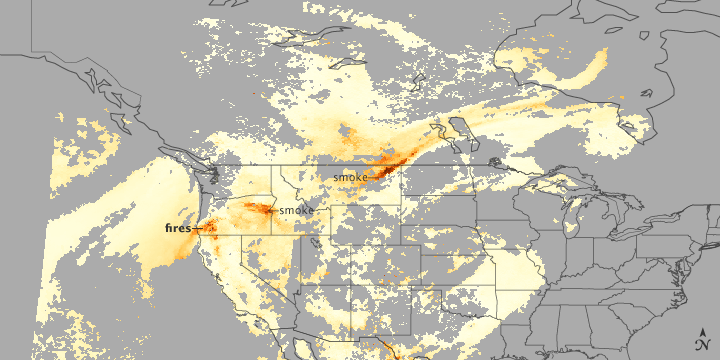 Air pollution has many sources. Some air pollution comes from local sources like cars, power plants, industry, or nearby fires. Local and regional laws limit this type of pollution as much as possible to keep air quality at healthy levels. But, says environmental engineer Jim Szykman in a new EarthSky podcast, satellites have shown that the haze that hangs in the skies over your house might not be from the local power plant: much of it might be from the next city, state, or from across the country or even the world. Pollution travels.

These images provide a case in point. Air quality plummeted to unhealthy levels in southwest Oregon on September 25, 2009. Choking smoke (gray-brown in the photo-like image) from large, lightning-ignited fires in the Cascade Mountains filled the skies. That nearby communities should experience poor air quality was to be expected, but the smoke affected air quality hundreds of kilometers away as well.

In the previous two days, the fires had sent a thick plume of smoke north over Washington and into Canada. By September 25, the smoke had drifted east and was visible in Idaho, Montana, and central Canada. The smoke transport is illustrated in the lower image, which shows satellite observations of the density of aerosols (tiny particles) in the atmosphere on September 25. Thick aerosols (shown in dark brown) appear directly over the fires and farther afield in eastern Oregon, Idaho, Montana, and central Canada, indicating that the smoke had drifted far to the east. Areas where the satellite couldn’t record aerosols are gray. Both the aerosol image and the true-color image are from the Moderate Resolution Imaging Spectroradiometer (MODIS) on NASA’s Terra satellite.

The long-distance travel of pollution causes problems for regional air quality agencies. It’s possible to regulate sources of pollution in your domain to maintain good air quality, but what do you do about pollution coming from somewhere else? By combining satellite and ground observations of pollution with weather forecasts, air quality managers can predict when pollution will come into their region from somewhere else and take measures to reduce local contributions to pollution, if necessary, and warn the public. Szykman led the development of a computer-based tool, called IDEA, to help scientists and air quality managers merge information to predict air quality. To read more about Szykman’s work on IDEA, please see A new IDEA in air quality monitoring on the Earth Observatory.