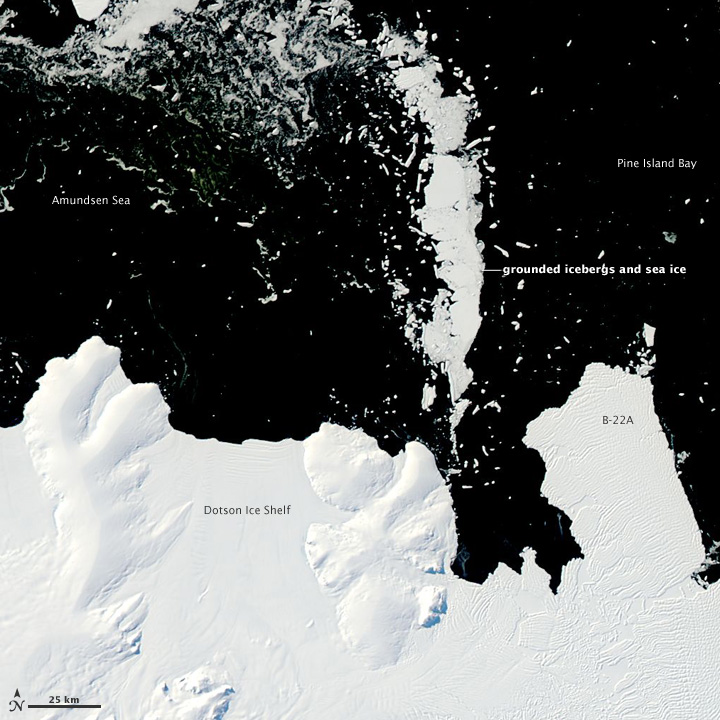 Pine Island Bay is tucked into a corner of the West Antarctic’s Walgreen Coast. The bay, which opens to the Amundsen Sea, is typically filled with sea ice at this time of year, but when the Moderate Resolution Imaging Spectroradiometer (MODIS) on NASA’s Aqua satellite passed overhead on March 14, 2010, the bay was largely ice-free.

Acquired at the end of the Antarctic summer, the image is illuminated by fairly low-angled sunlight, which highlights raised and textured areas, including ice-covered peninsulas and the corrugated surface of iceberg B-22A. B-22A may be grounded on a submarine shoal. Northwest of the iceberg is a combination of sea ice and grounded icebergs. This sea ice/iceberg feature has been larger in recent Antarctic summers than it appears in this image.

The coast of Antarctica not only has sea ice that comes and goes from year to year, but also longer-lasting ice shelves (thick slabs of ice attached to the coastline that partially float on the ocean surface). Among the ice shelves on the Walgreen Coast is Dotson Ice Shelf. Although most of the surface appears smooth, several long cracks appear to trace the leading edge of the shelf, hinting that the margin may calve some long, narrow icebergs in coming summers.

The presence or absence of sea ice affects both ocean surface waters and ice shelves. Thanks to its light color, sea ice reflects much of the Sun’s energy back into space, keeping underlying ocean waters cool. Without a cover of sea ice, the surface waters of the ocean warm. The exposure to sunlight also makes it possible for phytoplankton to bloom. West of the line of grounded icebergs, the ice floating in the Amundsen Sea takes on a greenish color; this may be due to phytoplankton or algae. When it comes to ice shelves, a sea-ice cap on the ocean surface dampens wave energy that might otherwise trigger ice-shelf retreat.

Strong southeasterly winds drive sea ice and surface waters away from the coastline. This process is believed to facilitate a return flow of comparatively warm, deeper water. As offshore and westerly winds have intensified, on average, over the past few decades, this warm return flow water has been drawn up onto the continental shelf, and even to the submerged deep glacial ice front. This inflow can be as much as 3 degrees Celsius (5 degrees Fahrenheit) above the melting point. As the grounded portion of the glacier melts back, it can move faster into the sea. The Pine Island, Smith, and Kohler Glaciers in this region have all been observed to accelerate in recent years.