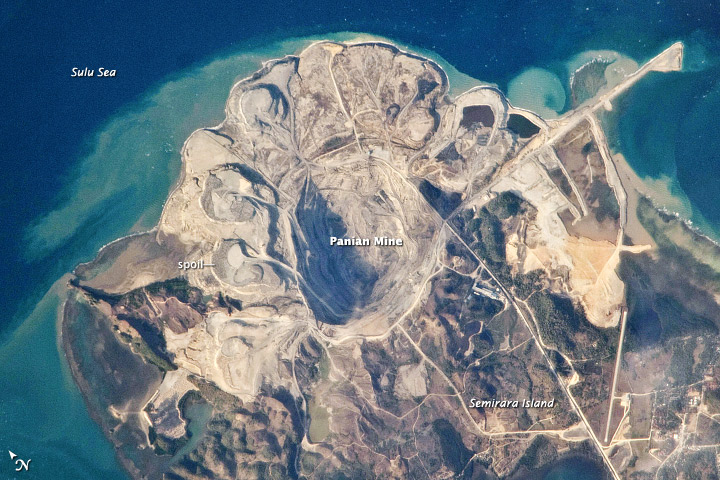 This detailed astronaut photograph provides a rare cloud-free view of the northern end of Semirara Island, which is located approximately 280 kilometers to the south of Manila in the Philippines. The northern part of the island is dominated by the Panian Coalfield, the largest of three coalfields on the island. Most of the coal is used for energy generation in the Philippines, with some exported to India and China.

The Panian coalfield is being mined using open-pit methods. The rock and soil above the coal layers (or seams) is known as overburden. Overburden is removed from the pit and heaped into piles, several of which ring the northern half of the pit. Several of the dark coal seams are visible along the sunlit southern wall of the pit (these may be more visible in the larger image version). Plumes of sediment from the overburden piles enter the Sulu Sea along the northern and eastern coastline of the island.

The Semirara coalfields formed from 12–23 million years ago along what was then a coastal plain—similar to the current geologic environment of the southeastern Gulf Coast of the United States. Organic materials were deposited in sequences of sandstone and mudstone, which were then covered by limestones as the environment became progressively more marine. Over geologic time, increased pressure from the overlying rocks changed the layers of organic material into coal.

Astronaut photograph ISS023-E-15142 was acquired on March 31, 2010, with a Nikon D2Xs digital camera fitted with an 800 mm lens, and is provided by the ISS Crew Earth Observations experiment and Image Science & Analysis Laboratory, Johnson Space Center. The image was taken by the Expedition 23 crew. The image in this article has been cropped and enhanced to improve contrast. Lens artifacts have been removed. The International Space Station Program supports the laboratory as part of the ISS National Lab to help astronauts take pictures of Earth that will be of the greatest value to scientists and the public, and to make those images freely available on the Internet. Additional images taken by astronauts and cosmonauts can be viewed at the NASA/JSC Gateway to Astronaut Photography of Earth. Caption by William L. Stefanov, NASA-JSC.

A rare cloud-free photo of the northern end of Semirara Island in the Philippines shows the Panian open-pit mine.