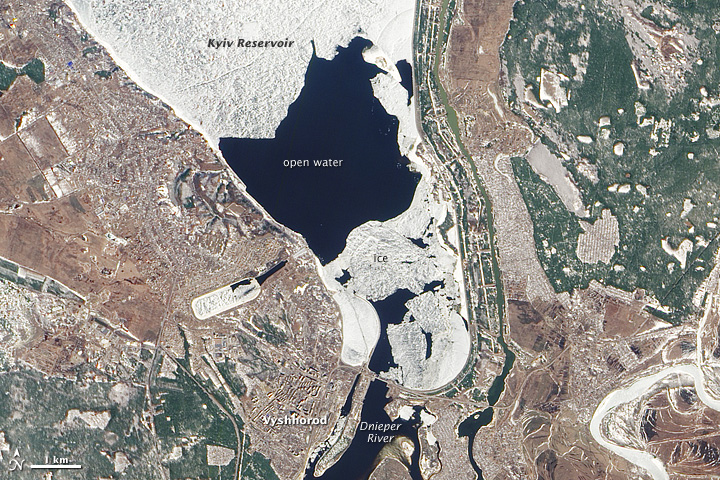 The Kyiv (or Kiev) Reservoir lies along the Dnieper River, some 16 kilometers (10 miles) north of the Ukrainian capital. Ice typically covers the reservoir each winter and melts each spring. When the Advanced Land Imager (ALI) on NASA’s Earth Observing-1 (EO-1) satellite captured this natural-color image on March 23, 2010, the reservoir’s surface was a combination of ice-covered and ice-free areas, the largest open-water area occurring just a few kilometers north of the reservoir’s southern tip.

The urban area closest to the Kyiv Reservior is not the capital city of the same name but a smaller settlement: Vyshhorod. Around the reservoir lies a combination of grassy, forested, agricultural, and urbanized lands. Roads and corridors of greenery line the eastern side of the reservoir, and residential areas hug the shore on the western side. The natural landscape in this region is generally marshy and well watered. Although snow has mostly melted, much of the vegetation remains brown in this early springtime image.

Heavy snows in the region during the winter of 2009–2010 heightened the risk of springtime floods. Water officials lowered the reservoir’s level to prevent inundation of nearby settlements. Unfortunately, lowering the water level suffocated significant numbers of fish.

Acquired March 23, 2010, this natural-color image shows the southern end of the Kyiv (Kiev) Reservoir and part of the city of Vyshhorod. Ice lingers on parts of the reservoir’s surface.