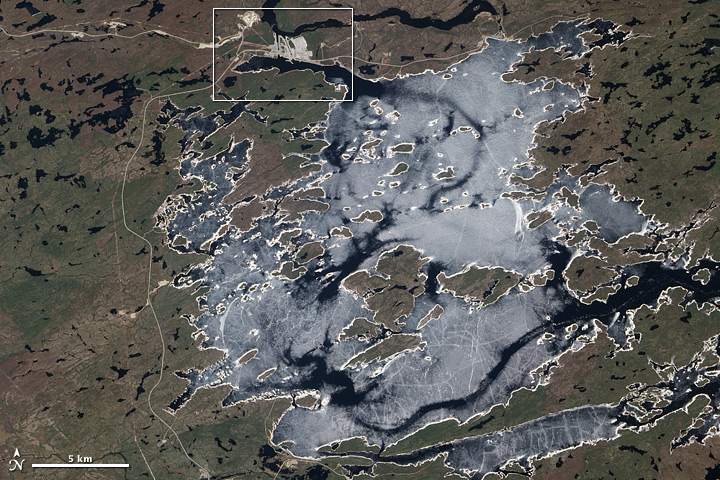 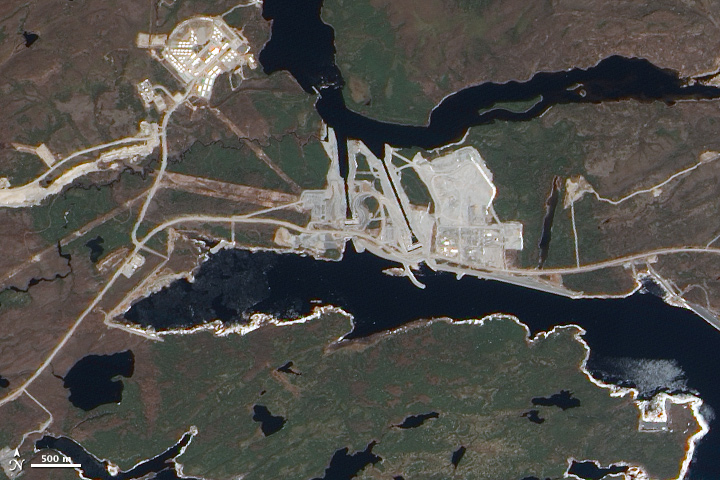 On May 19, 2011, the Advanced Land Imager (ALI) on NASA’s Earth Observing-1 (EO-1) satellite observed a work in progress in northern Quebec, east of James Bay. The project—known as the Eastmain-1-A/Sarcelle/Rupert Project—is designed to increase hydroelectric power for the Canadian province.

The top image is a wide-area view of the hydroelectric project, and it shows the Eastmain Reservoir, which lies about 800 kilometers (500 miles) north of Montreal. A layer of ice lingers on the reservoir's surface, with areas of open water appearing in darker shades of blue. Cracks on the ice span the reservoir, especially in the south.

The white outline in the top image shows the area covered in the lower, close-up view. This image provides a detailed look at some of the structures along this reservoir: the Eastmain-1 power house and the Eastmain-1-A power house, which is under construction.

Eastmain-1 has three water turbines that can collectively generate as much as 480 megawatt hours of electricity, according to the EM-1 Project plan. Meanwhile, HydroQuébec explains that Eastmain-1-A is intended to supplement its slightly older neighbor. When complete, Eastmain-1-A is expected to generate up to 768 megawatts.

HydroQuébec is responsible for Québec’s electricity transmission system, and distributes energy throughout Québec, and exports some energy to the United States. HydroQuébec undertook the Eastmain-1-A/Sarcelle/Rupert Project to harness and develop hydropower in the region. In 2006, a provincial review committee reported that the appearance and flow of the Rupert River would undeniably change as a result of the planned power structures. Nonetheless, the project was allowed to move forward. 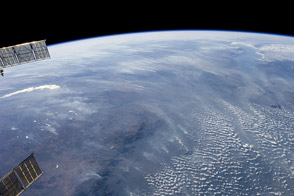 The São Simão Reservoir, near the confluence of the Rio Paranaiba and Rio Verde in Brazil, is the featured subject in a milestone image of Earth. This colorful, patchwork image is the 300,000th image of Earth downlinked from the International Space Station (ISS). The astronaut photography collection now includes more than 745,000 images of Earth taken by astronaut crews, beginning with the Mercury missions in 1961 and continuing to the present day on the ISS.

Acquired March 23, 2010, this natural-color image shows the southern end of the Kyiv (Kiev) Reservoir and part of the city of Vyshhorod. Ice lingers on parts of the reservoir’s surface.