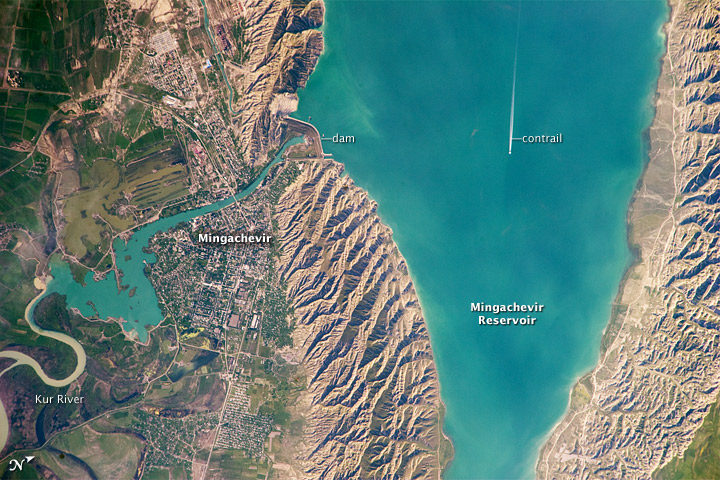 This detailed astronaut photograph highlights the southern Mingachevir Reservoir in north-central Azerbaijan. The Mingachevir Reservoir occupies part of the Kura Basin, a topographic depression located between the Greater Caucasus Mountains to the northeast and the Lesser Caucasus Mountains to the southwest. Folded layers of relatively young (less than 5. 3 million years old) sedimentary rock, explosive volcanic products (ash and tuff), and unconsolidated sediments form the gray hills along the northern and southern shorelines of the reservoir (image center and right). Afternoon sun highlights distinctive parallel patterns in the hills that are the result of water and wind erosion of different rock layers exposed at the surface.

The nearby city of Mingachevir (left) is split by the Kur River after it passes through the dam and hydroelectric power station complex at image top center. The current city was built in support of the hydroelectric power station constructed as part of the then-Soviet Union’s energy infrastructure for the region. Today, Mingachevir is the fourth-largest city in Azerbaijan (by population), and it has become a cultural and economic center of the country. The reservoir held approximately 15 billion cubic meters of water at the time this image was taken, with a total engineered capacity of 16 billion cubic meters. The width of the reservoir illustrated here is approximately 8 kilometers (5 miles); a jet flying over the reservoir left a contrail midway between the shorelines.

Astronaut photograph ISS023-E-35670 was acquired on May 8, 2010, with a Nikon D3S digital camera, and is provided by the ISS Crew Earth Observations experiment and Image Science & Analysis Laboratory, Johnson Space Center. The image was taken by the Expedition 23 crew. The image in this article has been cropped and enhanced to improve contrast. Lens artifacts have been removed. The International Space Station Program supports the laboratory as part of the ISS National Lab to help astronauts take pictures of Earth that will be of the greatest value to scientists and the public, and to make those images freely available on the Internet. Additional images taken by astronauts and cosmonauts can be viewed at the NASA/JSC Gateway to Astronaut Photography of Earth. Caption by William L. Stefanov, NASA-JSC.

The São Simão Reservoir, near the confluence of the Rio Paranaiba and Rio Verde in Brazil, is the featured subject in a milestone image of Earth. This colorful, patchwork image is the 300,000th image of Earth downlinked from the International Space Station (ISS). The astronaut photography collection now includes more than 745,000 images of Earth taken by astronaut crews, beginning with the Mercury missions in 1961 and continuing to the present day on the ISS.