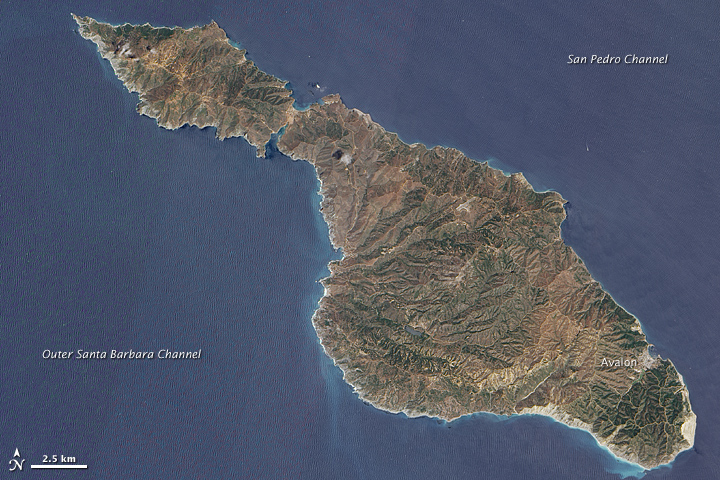 Southwest of the Los Angeles coast lies Santa Catalina Island, a 35-kilometer- (22-mile-) long island that runs roughly northwest to southeast, and spans 13 kilometers (8 miles) at its widest point. Rugged hills, some of them sparsely vegetated, dominate the landscape. The island’s highest peak, Mt. Orizaba, reaches an altitude of 639 meters (2,097 feet). Like the interior, the island’s coastline is rugged, rising dramatically from the ocean.

The Advanced Land Imager (ALI) on NASA’s Earth Observing-1 (EO-1) satellite captured this natural-color image of Santa Catalina Island on May 11, 2010. The island appears in shades of beige, brown, and dark green. The white line surrounding the island’s coast is probably surf. One small cloud floats over the island, casting its shadow toward the northwest.

Despite its small size, Santa Catalina is home to roughly 400 native plant species, some of them unique to the island, and about 180 introduced plant species. In May 2007, a human-caused wildfire broke out near the city of Avalon, burning 4,800 acres. Both the size and timing of the fire posed a risk to the island’s plants.

Santa Catalina’s vegetation is not well-adapted to frequent fires, and when they do occur, they usually happen at the end of the dry season. The May 2007 fire, in contrast, occurred at the beginning of the dry season, limiting options for rehabilitating the landscape. The Catalina Island Conservancy, which currently manages most of the island, compensated for the timing by stabilizing soils, limiting the growth of invasive plants, and occasionally planting native plants from nurseries.

Today, the largest settlement on Santa Catalina Island is Avalon. Avalon occurs in the same location as settlements dating back to prehistoric times. The first recorded visit to the island by a European explorer occurred in the sixteenth century.