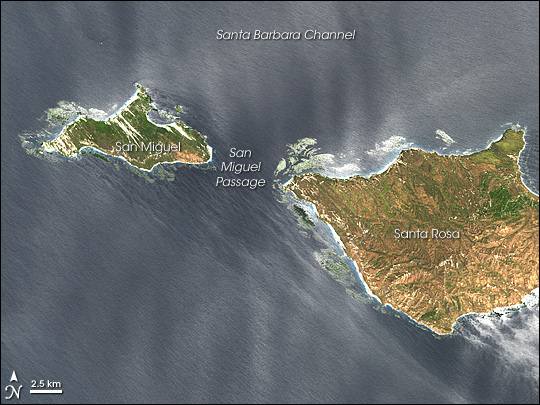 Off the California coast lies a series of small islands, all part of the Channel Islands National Park. On May 29, 2005, the Advanced Spaceborne Thermal Emission and Reflection Radiometer (ASTER) on NASA’s Terra satellite captured this image of two of those islands: San Miguel and Santa Rosa.

The westernmost island, San Miguel, is primarily a plateau, most of it with an elevation of approximately 150 meters (500 feet), although some hills on the island reach roughly 250 meters (800 feet). At just 9,500 acres (38 square kilometers), San Miguel faces a constant barrage of North Pacific winds. Strong stripes, resulting from linear sand dunes, cross this island from its northwestern beaches toward the southeast. In between the dunes, however, vegetation appears lush. According to the National Park Service, the island had been characterized as a “barren lump of sand” in the late nineteenth century, thanks to a century of overgrazing. Removal of the grazing animals eventually restored the island’s flora.

San Miguel’s neighbor, Santa Rosa, sports no stripes, and seems slightly less lush. Santa Rosa is the second-largest island off the California coast, at 53,000 acres (214 square kilometers). Only its eastern neighbor, Santa Cruz, is larger. Santa Rosa has generally low elevation except for its central mountain range that reaches up to roughly 484 meters (1,589 feet). Like its elevation, Santa Rosa’s coastline also varies, from wide sandy beaches to steep cliffs. In the water around the islands, kelp forests rise up from the ocean floor.

You can download a 15-meter-resolution KMZ file of San Miguel Island for use with Google Earth.

Eight small islands lie off California’s southern coast; on the map they appear situated roughly along a transect line that bypasses Los Angeles and stretches southeastward from Point Conception to San Diego.