Wave Clouds over the Arabian Sea 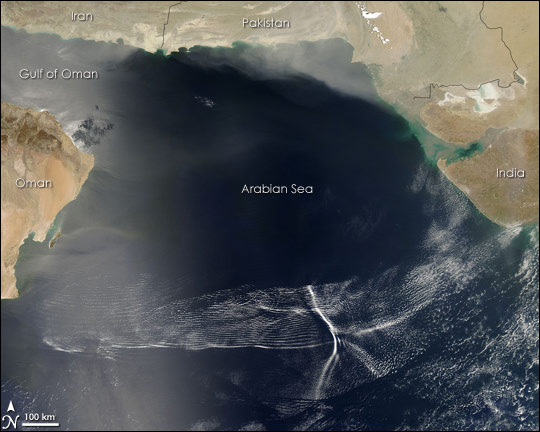 Like a massive, ethereal bird gliding into the Persian Gulf, a large cluster of wave clouds spans the Arabian Sea from Oman to India. This cloud formation is likely an undular bore, which is created in the interaction between the cool, dry air in a low-pressure system with a stable layer of warm, moist air. In this case, a low-pressure system probably sits over the Arabian Peninsula, the Gulf of Oman, and Iran and Pakistan. The strong winds generated by the low-pressure system are kicking up clouds of dust from Iran and Pakistan, and, to a lesser degree, Oman. The low-pressure system is also pushing air south-southeast, and this south-moving wave of displaced air pushes ahead of the low-pressure system like a mound of water moving ahead of a boat in calm water. The wave of cool, dry air pushes forward until it meets the wall of warm, moist air that blankets the Arabian Sea. When the two air masses clash, the cool air pushes the warm air up. The warm air rises, cools at the peak of the wave, falls again, and then rises to a slightly lower peak, and so forth, until the wave dissipates. Clouds form at the high-altitude peaks of the waves, with the most defined cloud at the front of the group, where the initial wave formed, followed by increasingly less-defined lines of cloud.

The air that moves in front of the low-pressure system does not push forward in a uniform wall; instead it pushes forward in a ragged band, with one part racing ahead of another, like a line of crew racers on a river. Because the air is not uniform, there are small, interacting arcs of waves within the larger band of clouds.

Undular bores are rare and hard to predict. This particular undular bore formed over the Arabian Sea on May 8, 2007, when the Moderate Resolution Imaging Spectroradiometer (MODIS) on NASA’s Aqua satellite captured this photo-like image. Typical undular bore patterns might display one or two rows of clouds. With more than thirty waves of clouds, this cloud pattern is unusually large. Some secondary air mass—a jet of warm tropical air, perhaps—cuts across the center of the wave pattern, creating the long vertical cloud that makes the formation resemble a bird.

The undulating air also appears to have roughened the surface of the ocean. Bands of light and dark water mimic the wave pattern near the shore of Oman. Rough water disperses light, creating the dark bands, while calm water is brighter. This wave pattern is probably happening across the Arabian Sea, but it is only visible on the left side of the image because of the angle of the light reflecting from the water. In this area, sunlight reflecting off the water directly to the MODIS sensor turns the water’s surface into a silvery mirror. It is only in these areas of sunglint that the surface roughness created by the undular bore is visible.

The large image provided above is at MODIS’ maximum resolution of 250 meters per pixel. The image is available in additional resolutions from the MODIS Rapid Response System. For a different view of an undular bore, see LIDAR Profile of a Passing Cold Front on the Earth Science Picture of the Day, a service of the Universities Space Research Association sponsored by NASA Goddard Space Flight Center.

Like a massive, ethereal bird gliding into the Persian Gulf, a large cluster of wave clouds spans the Arabian Sea from Oman to India. This cloud formation is likely an undular bore, which is created in the interaction between the cool, dry air in a low-pressure system with a stable layer of warm, moist air.