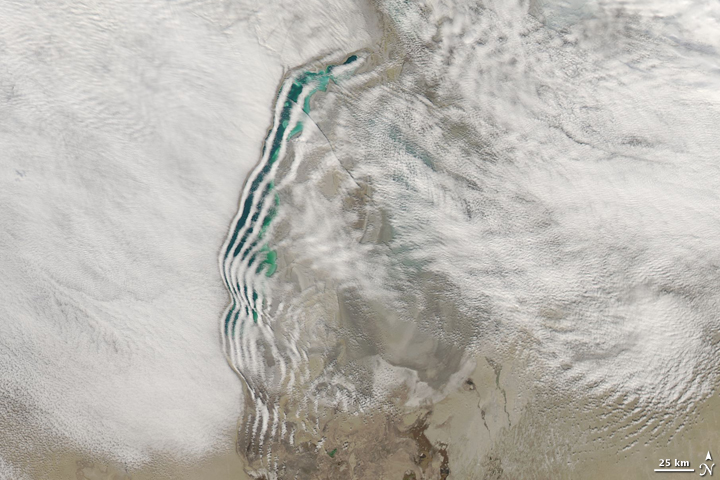 Distinctive lines of clouds stretch out from the shore of the Aral Sea in this photo-like image captured by the Moderate Resolution Imaging Spectroradiometer (MODIS) on NASA’s Aqua satellite on March 12, 2009. While wave clouds like this are not unusual, this particular pattern over the Aral Sea is highly unusual. The clouds conform exactly to the shape of the western shore.

Wave clouds typically form when a mountain, island, or even another mass of air forces an air mass to rise. The air cools as it rises, and if there is moisture in the air, the water condenses into clouds. Once the air has gone over the obstacle, it sinks again. The air warms as it drops, and the cloud dissipates. Like ripples on a pond, the wave motion continues, and the air rises and drops again and again until eventually the wave dissipates. The result is a line of clouds marking the crests of the wave, separated by clear areas in the troughs of the wave.

In this case, the western shore of the Aral Sea clearly created the disturbance needed to generate the initial wave motion. But what was the disturbance? There are several possibilities. First, the waves could be caused by a change in wind speed as the air moved eastward over the sea. Air moves slowly over land, slowed by plants, changes in elevation, and other rough features. When the air reached the sea, the surface it encountered was smooth, and the air near the surface would have moved faster. The air above it, however, would have continued to move at the previous pace. Imagine a jogger who unexpectedly steps on a patch of ice: his feet move forward faster than his head, and he falls back as his legs slip forward under him. The air experiences much the same motion. The lower layer of air (in contact with the smooth surface of the water) moves more quickly than the air above it, pushing the lower layer of air up. This motion could have created the wave that generated these clouds.

Another possibility is that the shoreline is elevated above the water. The Aral Sea has been steadily shrinking. What remains is the deepest portions of the sea. It is possible that the western shore is distinctly defined, and that there is a drop to the surface of the water. This change in elevation would cause the surface air to drop suddenly, which could also initiate wave motion. Both factors, the air speed and the shoreline, may in fact be working together to influence the shape of the clouds. Regardless of how they formed, the result is a beautiful fan of white over the emerald water of the Aral Sea.