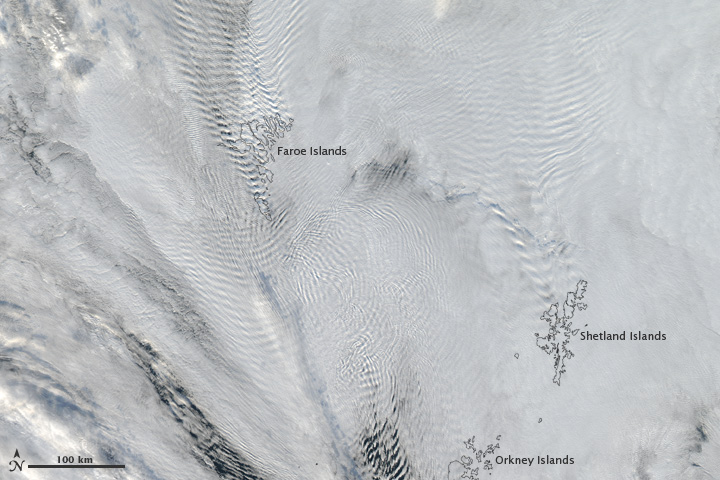 If air were visible, it would be a thing of mesmerizing beauty and motion. Air courses in streams and eddies; it rises and falls and flows. This image, taken by the Moderate Resolution Imaging Spectroradiometer (MODIS) on NASA’s Aqua satellite on November 9, 2011, offers a rare snapshot of motion in the atmosphere. Currents of air shaped an otherwise uniform layer of marine clouds over the North Sea.

Air moving over the ocean flows smoothly over the water because it encounters no obstacles. When the air meets an island, it has to lift up over the land. What goes up must come down, and the air sinks again. The motion sets up a wave pattern that continues for some time until the energy is dissipated. Like the ripples when you toss a stone in calm water, the waves are most distinct near the source (the island) and gradually become less distinct at a distance.

The rippling air shapes the low clouds in this image. The clouds at the top of the wave are brighter than clouds in the trough. Such clouds are often called ship-wave clouds because they resemble the waves created by a ship cutting through calm water.

In the North Sea, air encounters a number of obstacles that create wave patterns. In some cases, as over the Faroe Islands, the wave patterns compliment one another, resulting in a wide swath. But in other cases, the waves created by one island or islet interact with waves created by another. The result is a mishmash of circular waves in a classic interference pattern.