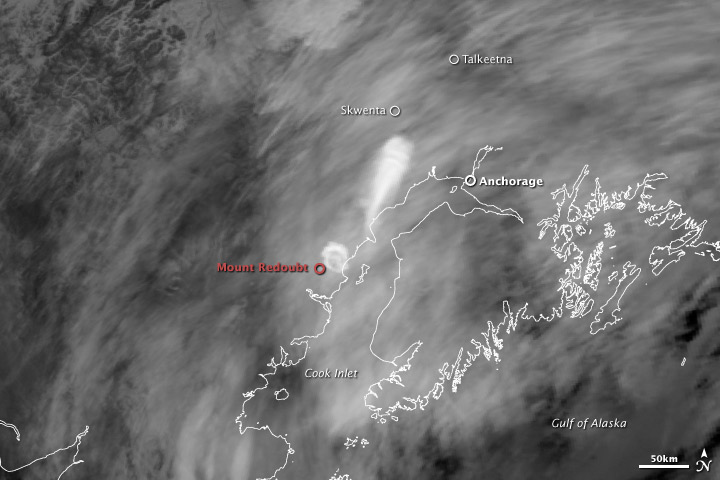 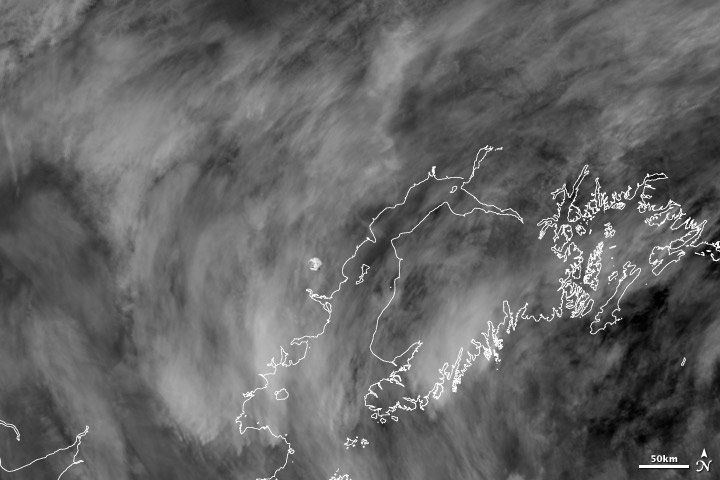 After two months of restlessness and a day of heightened earthquake activity, Alaska’s Mount Redoubt Volcano erupted explosively on Sunday, March 22, 2009, at 10:38 p.m. Alaska Daylight Time, according to the Alaska Volcano Observatory. Overnight, four additional large eruptions occurred, the fifth one larger than the previous ones. Scientists estimated the plume reached a height of 50,000 feet above sea level. As the ash spread north and northeast, ashfall advisories were issued for communities north of Mt. Redoubt. Geologists warned of the possibility of mudflows and debris avalanches from melting ice on the mountain’s summit.

These eruptions all occurred in darkness, which means that photo-like images from satellites weren’t possible. But the plumes were detectable in thermal infrared imagery captured by the Moderate Resolution Imaging Spectroradiometer (MODIS) on NASA’s Terra (top) and Aqua (bottom) satellites. Temperatures range from warmer (black) to colder (white).

The Terra MODIS image was captured at 12:30 a.m. March 23, just 16 minutes after the third large eruption. Two plumes of ash are visible: a long white plume reaching north, and a smaller one just northeast the volcano. Communities along the trajectory of the ash plume included Skwenta and Talkeenta. The Aqua MODIS image was captured four hours later, at 4:30 a.m., just as the fifth large eruption began. At that time, the new ash plume was located directly over Mt. Redoubt. Just beneath the plume is a black dot, which is probably heat from the eruption.

It might seem counterintuitive that the plumes of volcanic ash are the coldest things in these images—after all, aren’t volcanic eruptions hot? The coldness of the plume is a sign of how high it reached in the atmosphere. Terra and Aqua can’t see through clouds or thick smoke or ash. When no clouds are present, Terra and Aqua see the thermal infrared energy (heat) radiated by the Earth’s surface. (This ability frequently makes it possible for the sensors to detect volcanic eruptions.) But when clouds or thick ash block the satellites’ views of lower altitudes, then the heat the satellites see is the heat from the top of the cloud or ash plume. The stronger the eruption, the higher into the atmosphere the plume climbs, and the colder its top becomes.