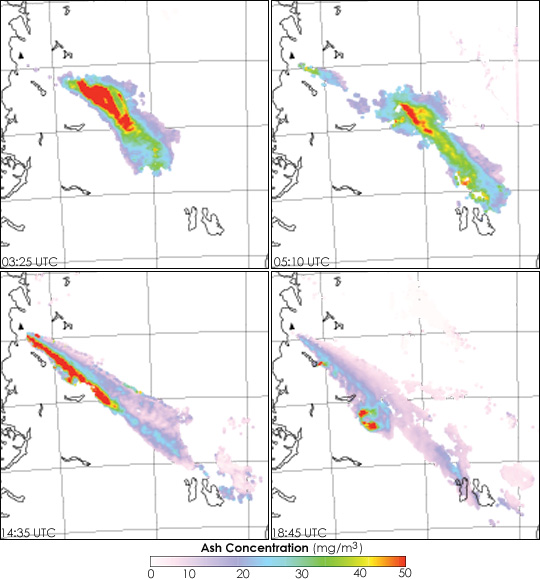 When the Chaiten Volcano of southern Chile began to erupt on May 2, 2008, the plume it sent into the atmosphere contained mostly ash. Fine ash is hazardous to jet aircraft and can remain in the atmosphere for many hours as it is transported by the winds. Even several hundred kilometers downstream from the volcano, the concentration of fine ash can be significant enough to cause damage to jet aircraft engines. The ash can be tracked and identified with the Moderate Resolution Imaging Spectroradiometer (MODIS) on NASA’s Terra and Aqua satellites. Areas with high densities of ash can be delineated as hazardous.

The volcano was putting the most ash into the atmosphere in the early, pre-dawn hours of the day, when Terra MODIS observed the volcano during the satellite’s night-time overpass, upper left. The eruption had clearly eased, and some of the ash had fallen out of the atmosphere when Aqua MODIS captured the data used in the next image nearly two hours later. The eruption resumed by mid-morning when Terra MODIS took the lower left image. Ash streams southeast away from the peak in a well-defined plume. (See Chaiten Volcano Erupts for a photo-like version of the MODIS image acquired at 14:35 UTC.) The plume had again thinned by early afternoon when the lower right image was taken by Aqua MODIS.

Volcanic ash contains large amounts of silicates (a glassy, hard mineral) that scatter and absorb infrared light differently than water and ice in the atmosphere. By combining a model of the ash’s physical characteristics—the way it reflects light and how various sizes of ash particles tend to be distributed in the plume— with a model of the way energy is absorbed, emitted, and scattered in the atmosphere and on Earth’s surface, scientists can estimate how thick the volcanic plume is and how large the ash particles in the plume are. Since this method of tracking ash relies on infrared light, it works equally well during the day or night, as this series of images shows.

The Chaiten ash traveled as far as South Africa, and at least one aircraft encounter was reported. Ashfall can also cause damage to buildings and roads, disrupt power, and contaminate water supplies. Fine ash is a hazard to humans, because it causes eye irritation and breathing difficulties, particularly in people with asthma.