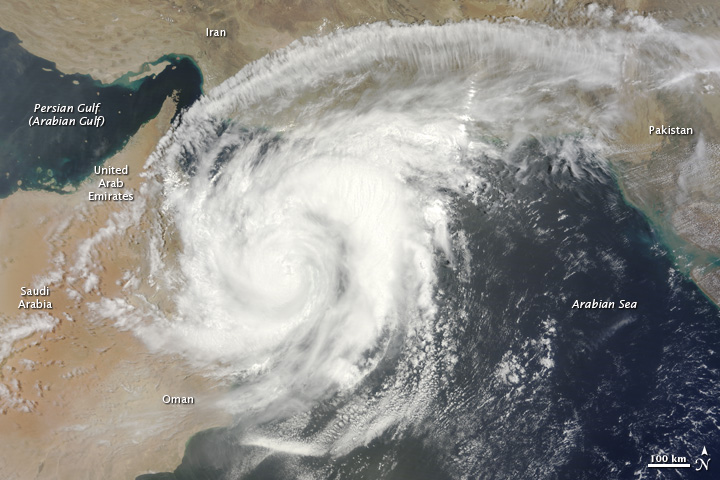 Once a powerful Category 4 storm, Cyclone Phet had weakened to a Category 3 storm by the time it came ashore over Oman on June 4, 2010. The Moderate Resolution Imaging Spectroradiometer (MODIS) on NASA’s Terra satellite acquired this photo-like image of the storm at 10:40 a.m. local time on June 4. By that time, Phet had degraded into a Category 1 storm with winds of about 75 knots (140 kilometers per hour or 86 miles per hour).

The storm’s swirling clouds cover most of northern Oman and all of the Gulf of Oman in this image. Though it is partially over land, the storm maintains a distinctive spiraling shape. In its northward trek over the Arabian Sea, Cyclone Phet gave Oman a glancing blow, cutting across the northeast edge of the country. The Joint Typhoon Warning Center forecast that the storm would re-emerge over the Gulf of Oman late on June 4 or early June 5, and move east towards Karachi, Pakistan, as a tropical storm.

According to news reports, Phet flooded Oman’s capital city, Masqat, but had not caused any casualties as of June 4.

The large image is the highest-resolution version of the image. The image is available in additional resolutions from the MODIS Rapid Response Team.