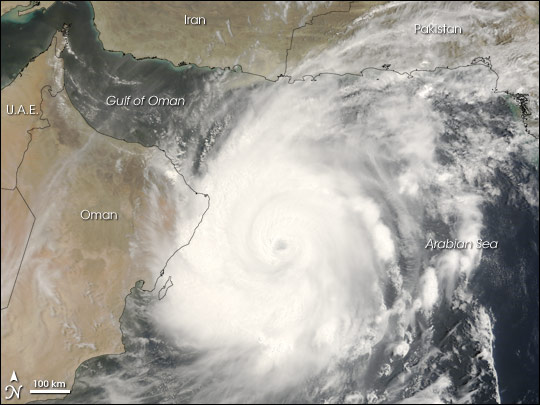 A storm with near-perfect symmetry and a well-defined eye hovering over the warm waters of the Caribbean or in the South Pacific is not unusual, but Tropical Cyclone Gonu showed up in a rather different place: the Arabian Sea. Though rare, cyclones like Gonu are not unheard of in the northern Indian Ocean basin. Most cyclones that form in the region form over the Bay of Bengal, east of India. Those that take shape over the Arabian Sea, west of the Indian peninsula, tend to be small and fizzle out before coming ashore. Cyclone Gonu was a rare exception. According to storm statistics maintained on Unisys Weather, the last storm of this size to form over the Arabian Sea was Cyclone 01A, which tracked northwest along the coast of India between May 21 and May 28, 2001. Unlike Gonu’s forecasted track, Cyclone 01A’s path never brought it ashore.

At 9:35 a.m. local time (06:35 UTC) on June 5, 2007, when the Moderate Resolution Imaging Spectroradiometer (MODIS) on NASA’s Terra satellite captured this image, Tropical Cyclone Gonu was approaching the northeastern shore of Oman. At this time, the powerful storm had reached a dangerous Category 4 status. Sustained winds were measured at 250 kilometers per hour (155 miles per hour) according to the University of Hawaii’s Tropical Storm Information Center, at the time of this MODIS image. The storm has the hallmark tightly wound arms that spiral around a well-defined, circular eye. The eye is surrounded by a wall of towering clouds that cast shadows on the surrounding clouds. Called hot towers, these clouds are a sign of the powerful uplift that feeds the storm. The symmetrical spirals, distinct eye, and towering clouds are all features regularly seen in satellite images of other particularly powerful cyclones, which are also known as typhoons or hurricanes when they form in other parts of the world.

The forecast as of June 5 called for the storm to graze Oman’s shore, but with the center of the storm staying offshore in the Gulf of Oman. The storm’s first landfall was predicted to be in southern Iran. The cooler water along the Oman coast was expected to rob the storm of some of its intensity, and it was predicted to strike the Iranian coast at around Category 1 strength. If, however, the forecast track is not quite right and the storm stays farther from shore over shallower and much warmer waters in the Gulf of Oman, it could make landfall while still packing Category 3 winds. In either case, communities along the Gulf of Oman are poorly prepared for hurricanes, given their rarity, and severe damage to cities and oil platforms is possible due to winds and storm surge.

You can download a 250-meter-resolution Cyclone Gonu KMZ file for use with Google Earth.

You might expect to see a storm with near-perfect symmetry and a well-defined eye hovering over the warm waters of the Caribbean or in the South Pacific, but Tropical Cyclone Gonu showed up in an unusual place. On June 4, 2007, Tropical Cyclone Gonu was approaching the northeastern shore of Oman, a region better known for hot desert conditions.