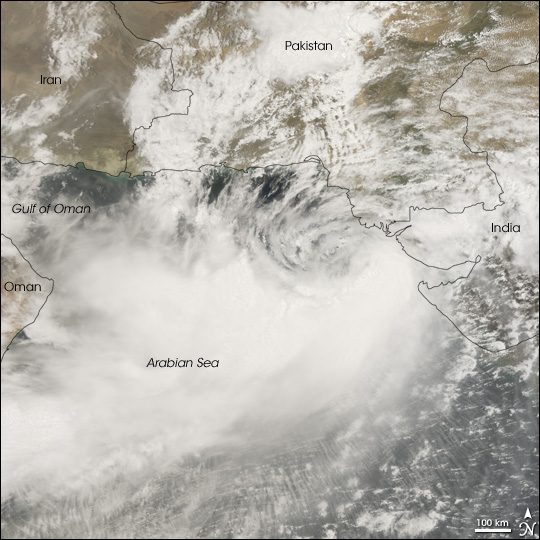 Cyclonic storms in the Arabian Sea are rare, but not unheard of. Two tropical cyclones in the space of a month, on the other hand, is quite rare indeed. Unlike its predecessor, Tropical Cyclone Gonu, Cyclone 03B originated on the opposite side of the Indian Peninsula in the Bay of Bengal. At 11:10 a.m. local time (06:10 UTC) on June 25, 2007, when the Moderate Resolution Imaging Spectroradiometer (MODIS) on NASA’s Terra satellite captured this image, Tropical Cyclone 03B was reforming in the Arabian Sea south of the Pakistan coast after having crossed over India. The storm system has a discernible spiraling shape, but does not appear well-formed in this image. The storm has no distinct eye, suggesting that it was not particularly well organized. At the time, sustained winds were measured at 60 kilometers per hour (40 miles per hour) according to the University of Hawaii’s Tropical Storm Information Center.

The storm flooded India’s Andhra Pradesh province, resulting in 45 deaths, according to Weather Underground. It also caused flooding and wind damage in Karachi, Pakistan, where the death toll was around 200, according to BBC News. After crossing land, the storm reached the Arabian Sea and began to reform. As of June 26, forecasts were calling for the storm to gain some organization and power, skirt the Pakistan coast, and make landfall again somewhere near the border between Iran and Pakistan. Storm surge from Cyclone 03B was predicted to be moderately high, even though the storm was not strong, since the offshore waters are shallow, similar to the northern Gulf of Mexico. Because these kinds of storms are rare in the area, coastal communities are particularly vulnerable to storm surge damage.

You can download a 250-meter-resolution Cyclone 03B KMZ file for use with Google Earth.