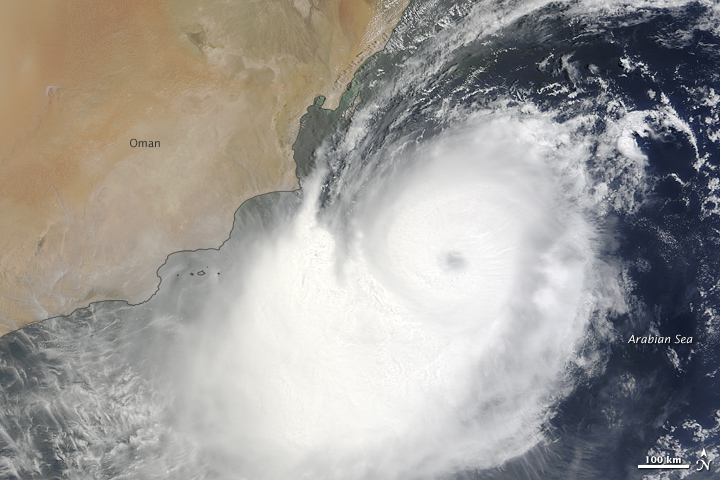 Tropical Cyclone Phet raged over the Arabian Sea just off the coast of Oman on June 2, 2010. The Moderate Resolution Imaging Spectroradiometer (MODIS) on NASA’s Terra satellite captured this natural-color image the same day. Northwest of the storm’s eye, one of Phet’s spiral arms skirts the coastline. Inland, skies are clear.

On June 2, 2010, the U.S. Navy’s Joint Typhoon Warning Center (JTWC) reported that Tropical Cyclone Phet had maximum sustained winds of 125 knots (230 kilometers per hour) and gusts up to 150 knots (280 kilometers per hour). The storm was located roughly 560 nautical miles (1,040 kilometers) southwest of Karachi, Pakistan. The storm had been slowly moving toward the northwest over several hours.

The JTWC stated that conditions favored continued intensification, and forecast that the storm would make landfall in Oman on June 3 before dissipating. Once over Oman, the JTWC expected, Phet would turn eastward and cross back over the northern Arabian Sea, but it would not remain significant storm at that time.