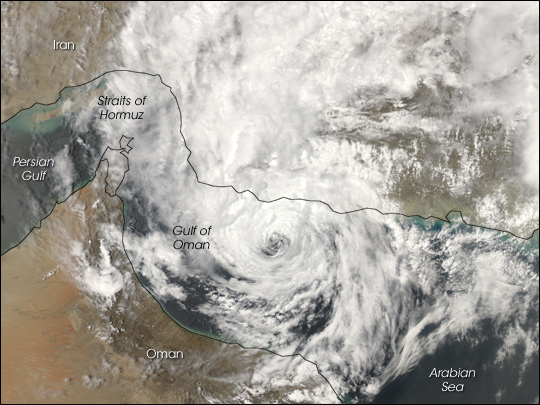 A cyclonic storm like Tropical Cyclone Gonu might not seem an odd sight until you consider that Gonu occurred in the Gulf of Oman and made landfall in Iran, a nation not known for cyclones. The most recent storm of Gonu’s magnitude hit the neighboring Sultanate of Oman was in 1977, according to the news service AlJazerra.net (English language).Given the rarity of these storms in the area, many shore facilities were never constructed to deal with the severe winds, strong rains, and high storm surge.

At 12:55 p.m. local time (09:55 UTC) on June 7, 2007, when the Moderate Resolution Imaging Spectroradiometer (MODIS) on NASA’s Aqua satellite captured this image, Tropical Cyclone Gonu was crossing the Gulf of Oman and heading northward towards the Iranian coast. By this time, the powerful storm had lost considerable power and was considered a mere powerful tropical storm. Sustained winds were measured at 60 kilometers per hour (40 miles per hour) according to the University of Hawaii’s Tropical Storm Information Center.

The satellite image shows Gonu bringing rain to both Oman and Iran as it heads north to the Iranian coastline. Because such storms are virtually unheard of in this part of the world, authorities have treated the storm with considerable caution: government offices in Oman and most private businesses declared a holiday from June 5 until June 9. They recommended people stay in their homes as much as possible and stock basic supplies and emergency needs, according to Middle East Online. Residents in low-lying coastal areas in southeastern Iran were also being evacuated, while the fishing fleet in neighboring Pakistan was ordered to stay in as waves battered the shores. Gonu, however, did not appear poised to reach the Straits of Hormuz, and oil shipping from the Persian Gulf had not been significantly disrupted as of June 6, according to a number of news services.

You can download a 250-meter-resolution Cyclone Gonu KMZ file for use with Google Earth.