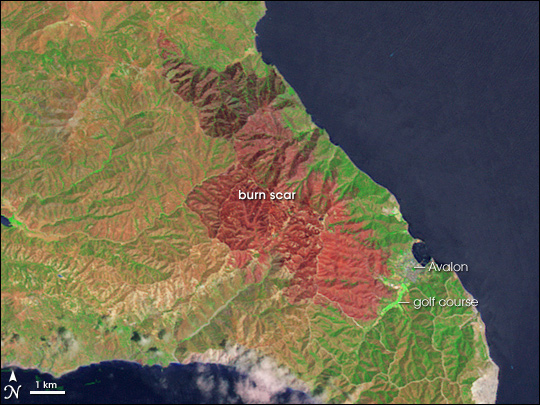 Although Santa Catalina Island is only about 33 kilometers (20.5 miles) from the Southern California mainland, naturally occurring fire is far less frequent there than in the chaparral and coniferous forests on the mainland. According to the Catalina Island Conservancy (steward for more than 42,000 acres on the 48,000-acre island) only 6 of the 229 fires that have occurred in natural areas on the island in the last century were triggered by lightning. The remainder were caused by people.

On May 10, a large human-caused fire broke out near the island’s only city, Avalon. Before it was contained five days later, the fire scorched 4,800 acres. This image from NASA’s Landsat 5 satellite on May 13, 2007, is made from a combination of visible and infrared light to enhance the contrast between areas burned by the fire (dark pink), naturally bare ground (light pinkish-orange), and vegetation (green). The darker color of the northern part of the fire scar may be due to differences in vegetation type or burn severity. Vegetation on the island is naturally sparse. Inland from the eastern tip, large shrubs and trees appear to be mostly confined to north-facing slopes and ravines. Other areas are dominated by smaller flowering plants and grasses. The brightest-green vegetation in the scene is the irrigated golf course southwest of Avalon.

Island ecosystems are especially delicate. They are often composed of small populations of endemic species (unique to the area), which makes recovery from catastrophic events difficult and in some cases, impossible. Because the island’s plants and animals have evolved with only occasional fire in specific seasons, this large, out-of-season fire (at the beginning, rather than the end of the island’s dry season) has the potential to cause long-term degradation.

The Catalina Island Conservancy is particularly worried about native plants. Because the fire occurred at the beginning of the dry season, reseeding was not an option for rehabilitating the landscape. When the native plants do begin to germinate on their own, browsing by deer (not native to the island) could completely eliminate some of the island’s rare endemics. Thus, the Conservancy’s strategy for rehabilitation includes physically stabilizing the soil (water bars, straw bales, etc), excluding non-native herbivores (deer, bison) from areas where native plants are regenerating, controlling the growth of invasive plant species, and replanting with nursery-grown native plants where possible.

You can download a 28.5-meter-resolution KMZ file of Santa Catalina Island suitable for use with Google Earth.