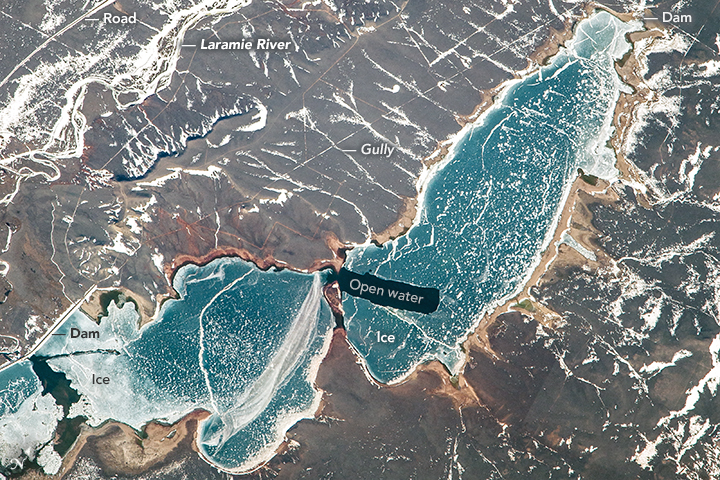 This photograph, taken in February 2017 from the International Space Station, shows an ice-covered reservoir in the windy high country of Wyoming, about 60 kilometers (40 miles) north of Laramie. The mile-wide reservoir stands at an elevation of more than 2000 meters (almost 7,000 feet) and feeds water into the upper Laramie River (top left). Lines of snow mark the small stream beds, roads, and low cliffs, and the floodplain of the river is almost unrecognizable under the snow patches.

Wheatland Reservoir No. 2 stores irrigation water for the farms of a community located 55 kilometers (34 miles) to the northeast. The reservoir was built when the town of Wheatland was founded in the 1880s, and it is unique in having two dam walls—the longer one in the south and the shorter one in the north. Spillways near these dam walls allow some water to make its way into the Laramie River.

Shallow water freezes faster and more readily, so the shorelines have the thickest ice and appear whiter than the middle of the reservoir.Two ice-free patches may be places where the water is moving towards outlets—that is, through narrows at the center of the lake toward the upper dam wall, and toward the other outlet at the longer dam wall. Another explanation is that the strong winds that blow across the high country of Wyoming have pushed the surface ice and opened up patches. Many small patches of ice appear to have been blown to the east side of the lake by the dominant westerly winds.

Astronaut photograph ISS050-E-51538 was acquired on February 20, 2017, with a Nikon D4 digital camera using an 1150 millimeter lens, and is provided by the ISS Crew Earth Observations Facility and the Earth Science and Remote Sensing Unit, Johnson Space Center. The image was taken by a member of the Expedition 50 crew. The image has been cropped and enhanced to improve contrast, and lens artifacts have been removed. The International Space Station Program supports the laboratory as part of the ISS National Lab to help astronauts take pictures of Earth that will be of the greatest value to scientists and the public, and to make those images freely available on the Internet. Additional images taken by astronauts and cosmonauts can be viewed at the NASA/JSC Gateway to Astronaut Photography of Earth. Caption by M. Justin Wilkinson, Texas State University, JETS Contract at NASA-JSC.