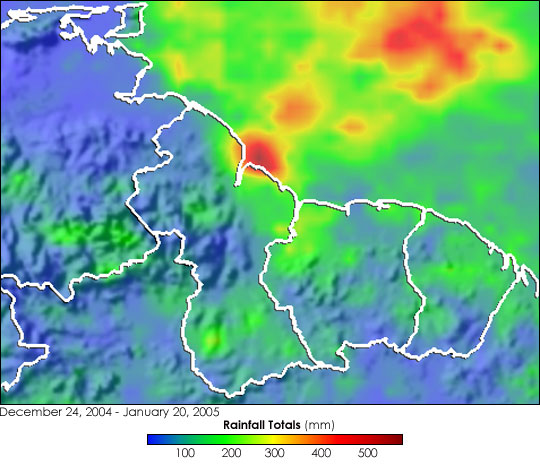 Since late December, Guyana has been hit by three distinct episodes of heavy rain that have resulted in some coastal areas of Guyana receiving upwards of 100 cm (40 inches) of rainfall—the most rainfall for a similar period in over 100 years. The heavy rain left two-thirds of Guyana’s capital, Georgetown, flooded, affecting over 120,000 and killing six.

The TRMM-based, near-real time Multi-satellite Precipitation Analysis (MPA) at the NASA Goddard Space Flight Center monitors rainfall over the global tropics. The image shows MPA rainfall totals for Guyana and the surrounding region of northeastern South America between December 24, 2004, and January 20, 2005. The highest rainfall totals on the order of 20 inches of rain (red areas) occur just offshore and right along the coastline of Guyana near the mouth of the Essequibo River and Georgetown.