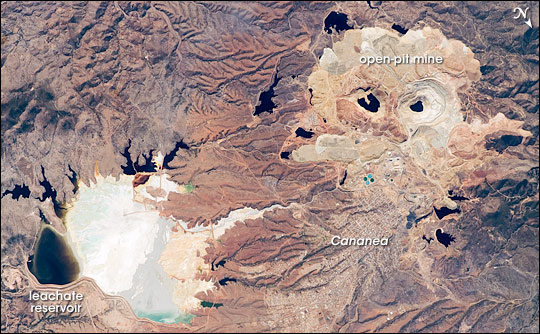 One of the largest open-pit copper mines in the world, the Cananea mine produced over 164,000 tonnes of copper in 2006. The mine is located approximately 40 kilometers south of the border between Arizona and Sonora, Mexico. The active, 2-kilometer-diameter Colorada Pit (image top right) is recognizable in this astronaut photograph by the concentric steps, or benches, cut around its perimeter (see larger image). These benches allow for access into the pit for extraction of ore and waste materials.

Water (black) fills the bottom of the pit and several other basins in the surrounding area. The city of Cananea, marked by its street grid, is northeast of the mine workings. A leachate reservoir for removal and evaporation of water pumped from the mine workings is located to the east of the mine (image lower left). The bluish-white color of deposits near the reservoir suggests the high mineral content of the leachate.

Copper and gold ores at Cananea are found in a porphyry copper deposit, a geological structure formed by crystal-rich magma moving upwards through pre-existing rock layers. A porphyry—an igneous rock with large crystals in a fine-grained matrix—forms as the magma cools and crystallizes. While crystallization is occurring, hot fluids can circulate through the magma and surrounding rocks via fractures. This hydrothermal alteration of the rocks typically forms copper-bearing and other minerals. Much of the Cananea mine’s ore is concentrated in breccia pipes—mineralized rod- or chimney-shaped bodies that contain broken rock fragments.

The mine workings at Cananea are significant in the recent history of Mexico, as poor working conditions there in 1906 led to a miner’s strike that resulted in 19 deaths. That event is generally considered to be a major catalyst of the Mexican Revolution of 1910, as well as the beginning of Mexico’s labor movement. Current environmental and economic conditions at the mine led to a worker strike that halted mine operations in 2007.

Astronaut photograph ISS016-E-31056 was acquired on March 3, 2008, with a Kodak 760C digital camera fitted with a 400 mm lens, and is provided by the ISS Crew Earth Observations experiment. The image was taken by the Expedition 16 crew, and is provided by the Image Science & Analysis Laboratory, Johnson Space Center. The image in this article has been cropped and enhanced to improve contrast. Lens artifacts have been removed. The International Space Station Program supports the laboratory to help astronauts take pictures of Earth that will be of the greatest value to scientists and the public, and to make those images freely available on the Internet. Additional images taken by astronauts and cosmonauts can be viewed at the NASA/JSC Gateway to Astronaut Photography of Earth. Caption by William L. Stefanov, NASA-JSC.