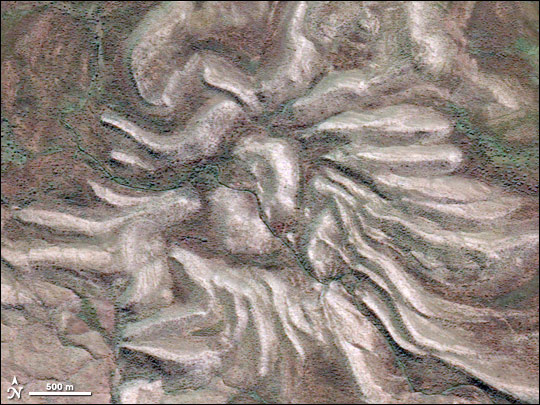 Most meteorite craters have a characteristic circular shape, and many of them, thanks to their low elevation, hold lakes. But in Western Australia, one crater resembles a giant arachnid. Appropriately named Spider Crater, it sprawls over the arid terrain like a prehistoric monster.

Taiwan’s Formost-2 satellite captured this image of Spider Crater on April 1, 2008. This high-resolution, true-color image provides enough detail to show individual trees and shrubs casting their shadows on the ground. Close to the ground, sparse patches of green vegetation appear throughout the image, contrasting with the red rocks. Vegetation is especially thick along the banks of the thin stream that meanders diagonally across the crater. Despite the plant life and clear skies, the sunlight reflecting off the pale ridges give this image an otherworldly appearance.

Like many impact craters, Spider Crater has a central area of uplift, about 500 meters (1,640 feet) across. Unlike most other craters, however, this one features “legs” curving across a depression some 13 by 11 kilometers (8 by 7 miles) wide. The legs are made from overlapping beds of tough sandstone. Because the sandstone has withstood the wind and rain more effectively than the less resilient rocks, the sandstone ridges remain relatively tall, mixed with red valleys where softer rocks have weathered away.

Had it been more typical, Spider Crater might have been easier for geologists to identify. Instead, they puzzled over this structure for some time before finding useful evidence in the 1970s. Shatter cones—cone-shaped, grooved rocks known only to appear in craters created by meteor or asteroid impacts—gave clues about the structure’s origin. Strongly deformed layers of sedimentary rock showing evidence of extraterrestrial trauma strengthened the case for an impact crater. Although geologists have explained what Spider Crater is, they have been less successful at pinpointing its exact age. Its formation has been estimated at between 900 and 600 million years ago.