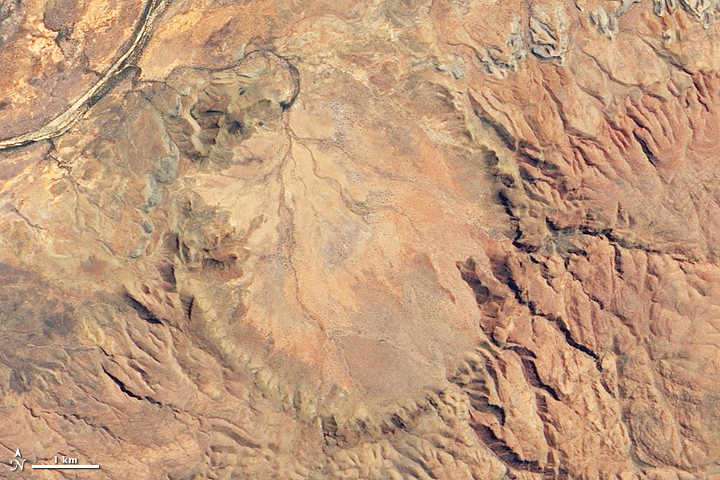 Geologists typically characterize Earth’s impact craters as one of two kinds: simple or complex. Simple craters are relatively small and bowl shaped while complex craters are relatively large with central uplifts and slumped rims. Goat Paddock Crater, located on the Kimberley Plateau of northwestern Australia, appears to straddle the simple-complex category, according to a study published in 2005.

The Advanced Land Imager (ALI) on NASA’s Earth Observing-1 (EO-1) satellite captured this natural-color image of Goat Paddock Crater on April 30, 2010. Sunlight from the northeast leaves southwestern facing slopes in shadow. Radial gorges extend outward from the crater, especially in the east and southeast. Cliffs surround the crater, rising to a height of about 100 to 150 meters (330 to 500 feet).

Spanning roughly 5 kilometers (3 miles), Goat Paddock Crater has a slightly elliptical shape. Dating from the Eocene Epoch, the crater is likely less than 50 million years old, but the impact bored into Proterozoic sandstones well over 500 million years old. Neither bowl-shaped nor uplifted, the surface of Goat Paddock Crater is flat. Much of the crater rim slumps inward. Geologists involved in the 2005 study suspect that the impact upturned bedrock, pushing it outward and breaking much of the rock into angular fragments, or breccia. After being pushed outward, the rock inclined inward toward the central cavity. The floor of Goat Paddock Crater is covered by sediments deposited since the Pleistocene Epoch.