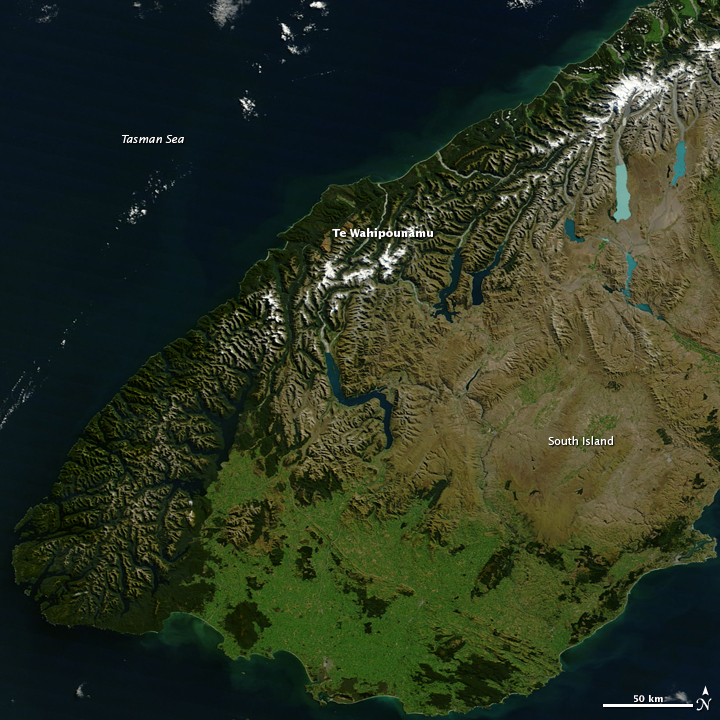 Te Wāhipounamu, the greenstone waters, is a sacred place in the Maori culture of New Zealand. The foreboding mountains and steep-walled valleys on New Zealand’s southwest coast are the places of Atua, gods. And the streams that wash down from the glacier-capped peaks carry a highly prized stone, a hard, translucent, green rock that the Maori carved into jewelry and blades, for both tools and weapons.

The rock, greenstone, came to New Zealand when Ngahue fled a jealous chieftainess on Hawaiki, taking Poutini (his greenstone) with him. His canoe brought him to the South Island of New Zealand, where he secreted the stone in the mountains of the southwest coast, says Maori legend. Poutini remains hidden, but pieces break off in streams, providing the Maori with precious greenstone. Most New Zealand greenstone is nephrite—a form of jade—though some is bowenite, another mineral.

From space, the west coast of New Zealand resembles the greenstone for which it is named. Dark green native forest extends from the mountain tree line to the shore. Southern beech, rimu and kahikatea (both tall conifers) once covered more than 80 percent of New Zealand, but the lowland forests are now less extensive. The lighter green land in the southeast was once forested, but is now grassland or agriculture.

The remaining forest is as precious as the greenstone it resembles. It is an echo of the ancient forests that once spread across the great southern continent, Gondwana, more than 100 million years ago. Some giant trees in today’s forest are as much as 800 years old. The forest is invaluable, too, because it harbors unique and endangered animals like the kiwi and takahe, both flightless birds, and the kea, the only alpine parrot.

Te Wāhipounamu is wilderness, and New Zealand has set the land aside to conserve it. The entire 2.6 million hectares that make up the southwest coast of the South Island (about 10 percent of New Zealand’s land area) is divided between four national parks, state forests, and other conservation areas. Its natural and cultural significance made Te Wāhipounamu a World Heritage area in December 1990.

The Moderate Resolution Imaging Spectroradiometer (MODIS) on NASA’s Terra satellite captured this unusually cloud-free view of New Zealand on April 9, 2010. The large image shows both the entire South Island and the North Island at the sensor’s maximum resolution. The image is available in additional resolutions from the MODIS Rapid Response Team.

Forests are being harvested near Tokoroa, New Zealand, which has been described as the hub of New Zealand’s forestry industry. The large tan areas are cleared forests. The land use pattern that looks like tan beads on a string are clearings used to stock timber before it is sent to pulp and paper mills about 4 kilometers south of Tokoroa. The light green areas around the town are dairy farms. 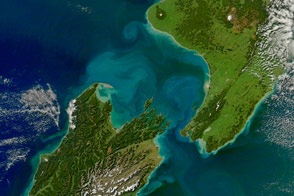 Sediment and phytoplankton create bright swirls of color in this image of New Zealand taken on April 29, 2011.