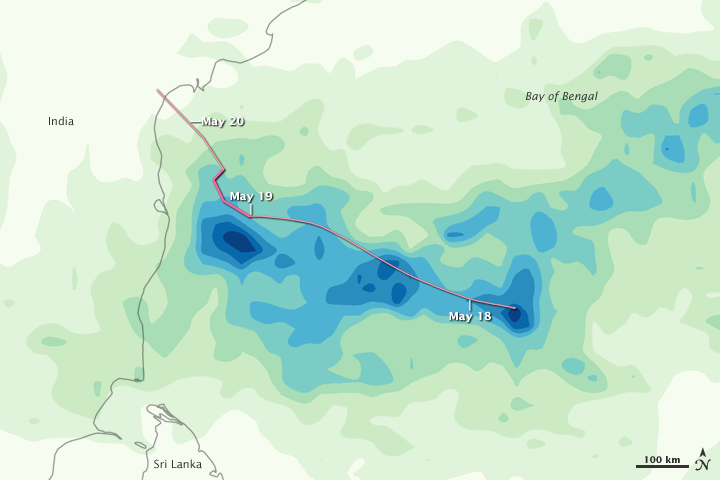 Tropical Cyclone Laila brought heavy rains and strong winds to the Bay of Bengal and parts of India in May 2010. This color-coded image shows estimated rainfall amounts for May 17 through May 19, as well as the storm track from May 17 to May 20. The heaviest amounts of rain—300 or more millimeters (12 or more inches)—appear in dark blue. The lightest amounts of rain—less than 37.5 millimeters (1.5 inches)—appear in pale green. The storm track is indicated by a pink line. The thicker, darker portion of that line shows where the storm intensified on May 19.

On May 20, 2010, the U.S. Navy’s Joint Typhoon Warning Center (JTWC) reported that Tropical Cyclone Laila had maximum sustained winds of 50 knots (90 kilometers per hour) and gusts up to 65 knots (120 kilometers per hour). Roughly 230 nautical miles (430 kilometers) southwest of the coastal city of Visakhapatnam (also spelled Vishakhapatnam), the storm had moved slowly northward over the previous six hours.

Reuters reported that the storm was expected to impact the Indian states of Andhra Pradesh and Tamil Nadu, and that fishing communities in coastal lowlands would be especially hard hit. Meanwhile, ReliefWeb reported that authorities in Sri Lanka were scrambling to find shelter for thousands of residents affected by torrential rains there, as monsoon season got underway.

Tropical Cyclone Laila affected the Bay of Bengal, the northern Indian Ocean, India, and Sri Lanka in late May 2010.