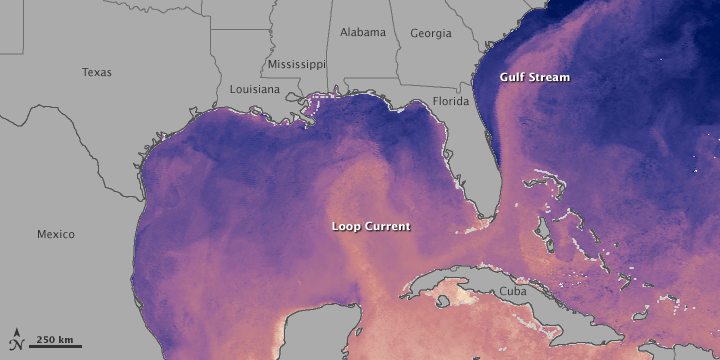 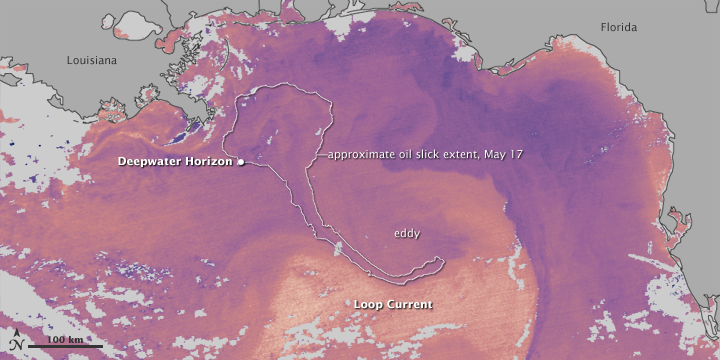 During the first weeks following the explosion at the Deepwater Horizon well in the Gulf of Mexico, oil drifting from the site of the incident usually headed west and northwest to the Mississippi River Delta. But in the third week of May, currents drew some of the oil southeast. According to the National Oceanic and Atmospheric Administration (NOAA), the southward spread increased the chance that the oil would become mixed up with the Loop Current, which might carry the oil toward Florida and the Keys.

This pair of sea surface temperature images shows how the warm waters of the Loop Current connect the Gulf of Mexico to the Atlantic Ocean (top image, May 1–8, 2010) and the dynamic northern margin of the Loop Current a week and a half later, on May 18 (bottom image). Based on observations of infrared energy collected by the Moderate Resolution Imaging Spectroradiometer (MODIS) on NASA’s Terra satellite, the images show cooler temperatures in blue and purple and warmer temperatures in pink and yellow. Cloudy areas are light gray.

The Loop Current pushes up into the Gulf from the Caribbean Sea. The current’s tropical warmth makes it stand out from the surrounding cooler waters of the Gulf of Mexico in this image. The current loses its northward momentum about mid-way through the gulf, and bends back on itself to flow south. It joins warm waters flowing eastward between Florida and Cuba, which then merge with the Gulf Stream Current on its journey up the East Coast.

The bottom image shows the location of the leaking well and the approximate location of the southern arm of the oil slick on May 17 (based on natural-color MODIS imagery). Oil was very close to the Loop Current, whose warm waters appear in yellow near the bottom of the image. However, there is also an eddy of cooler water (purple) circulating counterclockwise at the top of the Loop Current. According to NOAA, “Some amount of any oil drawn into the Loop Current would likely remain in the eddy, heading to the northeast, and some would enter the main Loop Current, where it might eventually head to the Florida Strait.”

Updated, May 20: In a web posting, NOAA’s Office of Response and Restoration confirmed that "a small portion of the oil slick has reached the Loop Current in the form of light to very light sheens.”

This pair of sea surface temperature images shows how the warm waters of the Loop Current connect the Gulf of Mexico to the Atlantic Ocean and the dynamic northern margin of the current on May 18. On May 18, NOAA reported that oil was very close to, and perhaps already entrained in, the Loop Current.