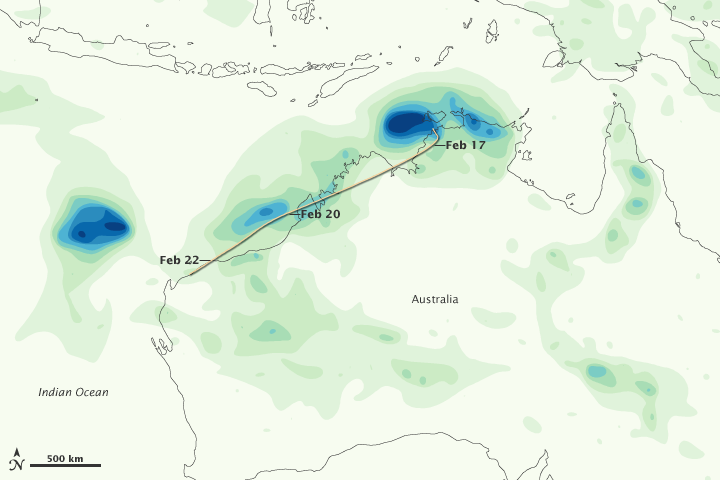 Tropical Cyclone Carlos brought heavy rains to the coasts of Northern Territory and Western Australia in February 2011. In the Northern Territory city of Darwin, Carlos helped break rainfall records in what was already an unusually rainy month. The storm’s high winds and heavy rains also forced the suspension of petroleum and mining projects in Western Australia, according to news reports.

The U.S. Navy’s Joint Typhoon Warning Center (JTWC) reported that, as of 11:00 p.m. Western Australia time on February 22, Carlos was located roughly 100 nautical miles (185 kilometers) east-northeast of Learmonth, Western Australia. The storm had maximum sustained winds of 55 knots (100 kilometers per hour) and gusts up to 70 knots (130 kilometers per hour). Carlos was forecast to maintain its current strength over the next 12 hours then move west of Learmonth and intensify slightly. The storm was not expected to transition to an extra-tropical storm for about 96 hours.