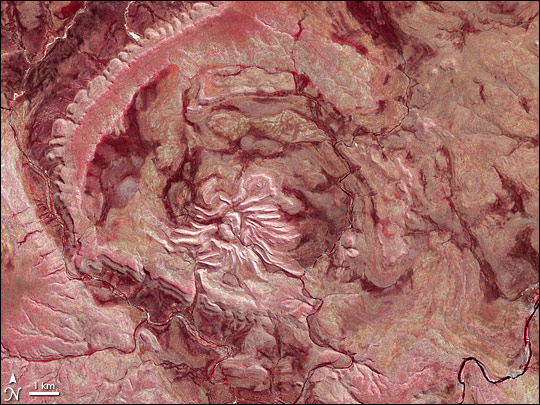 Over the Kimberley Region of northern Western Australia, satellite sensors and airplane passengers alike can see a giant arachnid sprawling over the arid landscape. This spider’s not just big, it’s old. This prehistoric monster crawls out of the past as if to remind us of the destructive power of the cosmos.

The Advanced Spaceborne Thermal Emission and Reflection Radiometer (ASTER) on NASA’s Terra satellite captured this image of Spider Crater and its surroundings on August 11, 2000. In this false-color image, the arid landscape appears in varying shades of crimson. Water appears blue-black, namely in the meandering river near the bottom edge of the image. Vegetation appears in shades of red. While vegetation looks sparse throughout the area, the intense red dots along the river indicate fairly lush—if intermittent—vegetation lining the riverbanks.

Near the center of the image is the Spider, sunlight giving an oddly ghostlike appearance to the steep ridges that form its legs. Geologists long puzzled over what this structure was, but found an important clue in the 1970s. They found shatter cones—cone-shaped, grooved rocks known only to appear in craters left by meteor or asteroid impacts. Other clues to the structure’s origin appeared in the form of strongly deformed layers of sedimentary rock that showed evidence of extraterrestrial trauma.

Spider Crater rests in a depression some 13 by 11 kilometers (8 by 7 miles) across. Meteorite craters often have central areas of uplift, and Spider Crater fits this pattern, with a central dome roughly 500 meters (1,640 feet) in diameter. Radiating from this central dome are features unusual in impact craters in general, but important in giving this crater its nickname. Overlapping beds of tough sandstone that have weathered the elements far better than the surrounding rocks form the spider’s “legs.” So while Spider Crater sits in a depression and has a central uplift area characteristic of impact craters, it shows extreme differences in erosion, giving it a unique appearance.

The age of Spider Crater is uncertain, but its formation has been estimated to fall between 900 and 600 million years ago. If this age estimate is correct, the crater formed from an impact that occurred during the Neoproterozoic, a period of geologic history when, some geologists hypothesize, Earth underwent a series of global ice ages nicknamed “Snowball Earth.”