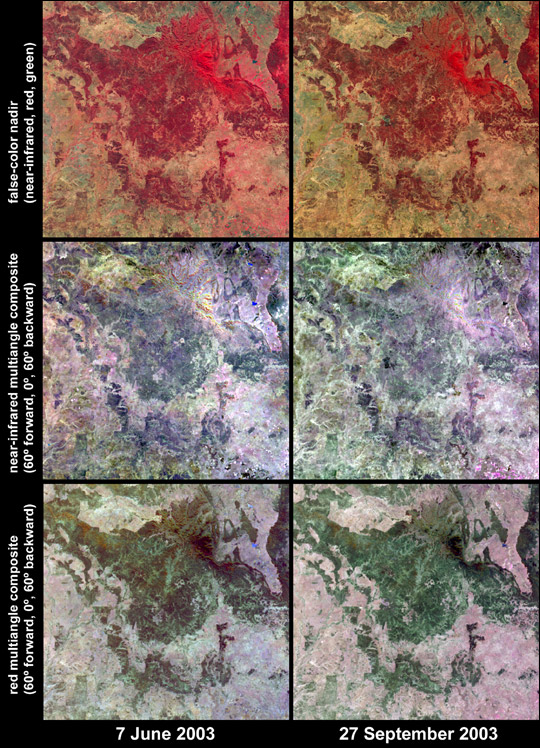 Surface changes across the Southern Brigalow Belt in Queensland, Australia, are illustrated by these six image panels acquired by NASA’s Multi-angle Imaging SpectroRadiometer (MISR) on June 7 (left) and September 27 (right), 2003, during the austral winter and spring seasons, respectively. This is the region of study for the pilot phase of a project conducted by Queensland’s Statewide Landcover and Trees Study (SLATS). SLATS is using observations from MISR to assess the relationship between multi-angular reflectance (how reflectance from the Earth's surface looks different depending on the angle from which the sensor observes the reflectance) and structural properties of forests and woodlands across Queensland.

The top panels display observations from the near-infrared, red, and green spectral bands of MISR’s nadir (looking straight down) camera as red, green and blue, respectively. Because vegetation protects itself by reflecting infrared radiation, areas of high vegetation appear bright red. For example, above image center, the densely vegetated Carnarvon Gorge National Park appears very bright red. In the lower left, the Warrego River flows southward through grassland areas toward the Murray-Darling river system. Lesser amounts of red between the winter and spring dates (especially at lower right) indicate a drop in vegetation activity in pastures and/or grasslands due to a dry spring.

The central panels are multi-angular composites in which data from the near-infrared band of MISR’s 60-degree forward, nadir, and 60-degree backward viewing cameras are displayed as red, green, and blue, respectively. The bottom panels display red-band data in the same configuration from the same cameras. Within the composites, color variations serve as a indicator for changes in angular reflectance. Angular reflectance changes based on vegetation structure, terrain and soil type, and also based on the different solar illumination conditions on the two dates. In the near-infrared band composites the Carnarvon Gorge area appears almost uniformly bright because of high transmittance of the leaves at near-infrared wavelengths and relatively low angular variation. This area appears dark in the red multiangle composites due to high absorption at the red band from the relatively uniform, dense tree canopy. In other words, sunlight at near-infrared wavelengths is strongly scattered between the leaf layers of the dense canopies, and the influence of shadows between the tree crowns is less pronounced compared with open woodlands.

For the SLATS poject, Australia’s Department of Natural Resources and Mines is using a newly released data product from MISR in its mapping of forest and woodland areas. The new product, called Local Mode, provides 275-meter spatial resolution georectified imagery in all 36 channels (nine cameras x four spectral bands) of the instrument, for selected target areas. This contrasts with the typical MISR operating mode, Global Mode, which provides imagery at 1.1-kilometer resolution in 24 of the 36 channels, and 275-meter resolution in the other 12. Since the beginning of the Terra mission, Local Mode data have been routinely acquired over dozens of targets around the globe, and the software to generate georectified imagery from the data has recently gone into production at the NASA Langley Atmospheric Sciences Data Center.

The Multi-angle Imaging SpectroRadiometer observes the daylit Earth continuously, and every 9 days views the entire globe between 82 degrees north and 82 degrees south latitude. This data product was generated from a portion of the imagery acquired during Terra orbits 18460 and 20091. The panels cover an area of 256 kilometers x 247 kilometers, and utilize data from blocks 110 to 112 within World Reference System-2 path 93.

MISR was built and is managed by NASA’s Jet Propulsion Laboratory, Pasadena, CA, for NASA’s Office of Earth Science, Washington, D.C. The Terra satellite is managed by NASA’s Goddard Space Flight Center, Greenbelt, MD. JPL is a division of the California Institute of Technology.