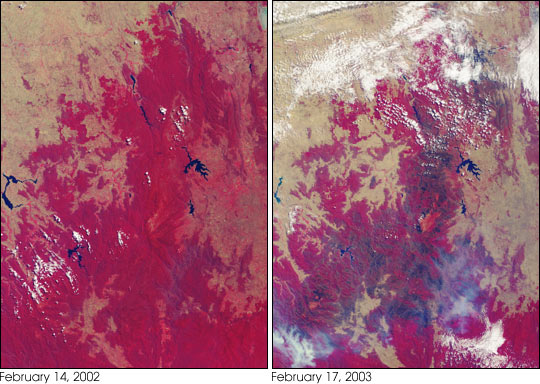 More than 2 million acres were consumed by hundreds of fires between December 2002 and February 2003 in southeastern Australia’s national parks, forests, foothills and city suburbs. These images were acquired on February 14, 2002 (left) and February 17, 2003 (right) by the Multi-angle Imaging SpectroRadiometer (MISR) instrument onboard NASA’s Terra satellite. The year 2002 was one of Australia’s hottest and driest on record, and the acreage burnt during the summer 2002-2003 fire season in Victoria, the Australian Capital Territory and southern New South Wales, is the largest since 1938-1939, when more than 3 million acres were scorched.

The extent of the burnt area and the dry conditions as of February 2003 are indicated by these contrasting false-color views. Both image panels display data from the near-infrared, red and blue spectral bands of MISR’s downward-viewing (nadir) camera, as red, green and blue, respectively. This display technique causes healthy vegetation to appear red and burnt areas to show as dark brown. The data displayed from the two dates were processed identically to preserve relative brightness variations. Vegetation changes related to the dry conditions (not related to the brown burn scars) are also indicated in the February 2003 panel, where many previously red areas exhibit instead the pale yellow-brown of the underlying soils and geology. Significant reduction in the surface area of several large and important water bodies are also apparent. The diminished extent of Lake Hume (along the left-hand edge) in the later date provides a good example.

The Multi-angle Imaging SpectroRadiometer observes the daylit Earth continuously and every 9 days views the entire globe between 82 degrees north and 82 degrees south latitude. The MISR Browse Image Viewer provides access to low-resolution true-color versions of these images. These data products were generated from a portion of the imagery acquired during Terra orbits 14999 and 16858. The panels cover an area of about 208 kilometers x 286 kilometers, and utilize data from blocks 118 to 121.