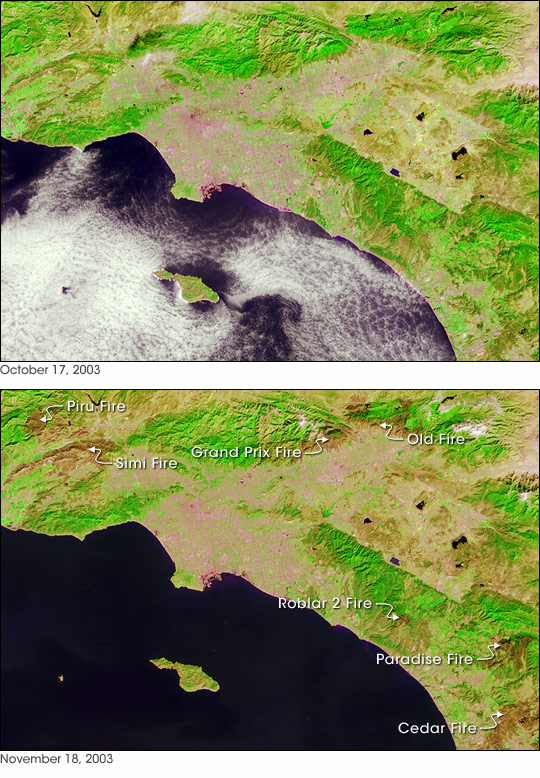 Brush fires consumed nearly 750,000 acres across Southern California between October 21 and November 18, 2003. Burn scars and vegetation changes wrought by the fires are illustrated in these false-color images captured on October 17 (top) and November 18 (bottom) by the Multi-angle Imaging SpectroRadiometer (MISR) on the Terra satellite. The images were created by displaying red, near-infrared and green spectral band data from MISR’s nadir (downward-looking) camera as red, green and blue, respectively.

Living vegetation appears in shades of green and urban areas appear pale grey and pink. Recently burned areas can be identified by their dramatic changes from vivid green to brown hues several weeks later. The locations of the largest fires are indicated by an annotated version of the November 18 image.

The Multi-angle Imaging SpectroRadiometer observes the daylit Earth continuously and every 9 days views the entire Earth between 82 degrees north and 82 degrees south latitude. These data products were generated from a portion of the imagery acquired during Terra orbits 20379 and 20845. The panels cover an area of about 241 kilometers x 162 kilometers, and utilize data from blocks 63 to 64 within World Reference System-2 path 41.