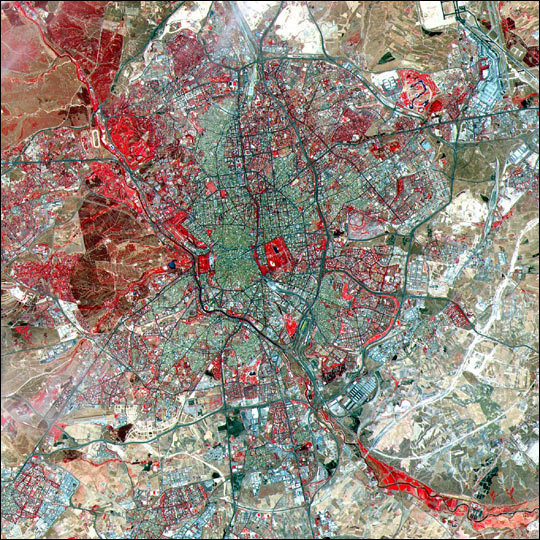 Madrid, Spain, is world renowned for its unique charm and its exhilarating cultural life. Museums, art galleries, palaces, and botanical gardens are at the heart of the city, pictured here in this Advanced Spaceborne Thermal Emission and Reflection Radiometer (ASTER) image from July 5, 2000. The image has been enhanced using a false-color technique that includes some of ASTER’s observations in the shortwave infrared as well as the visible part of the electromagnetic spectrum. In the infrared, vegetation reflects a lot of energy. If image creators put those observations into the red “channel” of a digital image, vegetated areas appear bright red.

In this scene, the gardens surrounding Palacio de Velázquez and Palacio de Cristal make a distinct red rectangle in image center, and embedded within it is a dark pool located in the Parque de El Retiro. Surrounding the parks and gardens, red changes to light green, which is the color of buildings and paved streets. On the western side of the gardens is a cluster of many of the city’s most famous museums. Indeed, the area boasts such a fantastic collection of sculpture, painting, and architecture in one place that the smaller red area to the west is a tree-lined avenue called the Paseo del Prado, the “Avenue of Art.”

Two large rivers run through Madrid. The Rio Manzanares runs from northwest to southeast through this image in a dark blue, wavy line. The thin strip of vegetation (red) that lines the river at upper left fades as the river passes into the heart of Madrid, and then reappears in the bottom right, as the river exits the city. At upper right, vegetation also lines the banks of the Rio Jarama.

In the 10th century, a Moorish fortress called Magerit was first built on the site, a plateau 656 meters (2,150 feet) above sea level, and Spanish Christians seized the city a century later. However, Madrid’s importance as a Spanish city was not established until 1561, when King Philip II chose it as the national capital, largely because of its geographic location in the very heart of the country. Some historic structures from this and later periods still grace the narrow streets of the old section of Madrid, although the Spanish Civil War exacted a heavy toll on the city. This image of Madrid covers an area 25 by 24 kilometers.